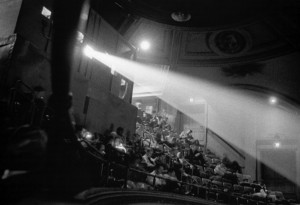 I probably saw nearly 1000 movies there over a 10 year period, and could wax rhapsodic ala Roy Batty of what I’d experienced: The shattering of box office records for the inspiring The Rise And Fall Of Idi Amin, considered by many to be the Gandhi of The Deuce; a hail of malt liquor bottles sailing towards the screen as fed-up audience members howled “Send this shit back to England!” during the aborted run of A Company Of Wolves; the unprecedented graphic impact of the Italian zombie/cannibal genre; watching sadly in a vast, empty theater as a bloated and ravaged Jean Seberg stumbled through a ‘70s Spanish thriller; the evergreen communal rapture of seeing Enter The Dragon for the umpteenth time; any given audience’s instant identification with every role played by Lieh Lo, Klaus Kinski or Bruce Dern; the final double feature – First Blood II and Cooley High – in the crumbling magnificence of the New Amsterdam Theater; the deviant ecstasy of opening-morning for Maniac, a film so skillfully depraved it seemed to physically give off the fetid smell of old sweat and urine. Behind me, a father sat watching with his 5-year-old son. “Daddy,” the boy loudly asked, “why that man cutting off that lady’s head?” “Because he a maniac,” daddy snapped. “Now shut the fuck up and watch the movie.”

But this much fun was never without some risk. There in the dark, stinky womb of a theater, dangerous situations could and would start at the drop of a dime bag. Usually it began with a scuffle between patrons (Note that nobody ever ‘shushed’ anyone on 42nd Street; loud advice and insults offered to on-screen characters was expected and encouraged). If the movie sucked – which they often did – plain old boredom could light the fuse. Many of the more memorable melees were caused by giant rat sightings. But for sheer bugfuck chaos, it was hard to top The Krush Groove Riot of 1985.

It was opening night at the Rialto Theater for the hip-hop epic Krush Groove, and expectations were just shy of revolution. For audiences who’d suffered the indignities of movies like Breakin’ and worse (namely Breakin’ 2: Electric Boogaloo), Krush Groove promised the real deal: the first credible movie depicting the rise of the NY hip-hop scene. Perhaps thinking that this b-boy blockbuster was not enough of a draw on its own, theater management made it the main feature of a triple bill. But this wasn’t any average time-killing combo: Krush Groove had been teamed with the crowd classics Cornbread, Earl & Me and Coffy for one of the more incendiary triple bills in 42nd Street history.

In Cornbread, Earl & Me, a young ghetto basketball star is murdered in slow-mo cold-blood by evil whitey cops. In Coffy, Pam Grier is forced to repeatedly doff her orange velour halter-top by evil whitey gangsters. And in Krush Groove, Run DMC, LL Cool J, Kurtis Blow and The Fat Boys must defeat the evil whitey record industry. To this day, I say a prayer of thanks to The Flying Spaghetti Monster that the theater bookers didn’t toss in Mandingo.

The theater was packed, the air filled with the smoke of loose joints, Newports, and the echoing clatter of bottles. When Cornbread, Earl & Me had finished, the crowd was gnashing teeth along with their buckets of greasy popcorn. By the time Coffy had reached its peak, the audience was tweaked beyond belief. As the opening credits for Krush Groove rolled, brothers and sisters were howling for blood.

Whatever set events into motion erupted suddenly in the middle of the theater. Raised voices turned to yelling, as the scuffling quickly spread like ‘The Wave’ punctuated by shouts of “MuthaFUCKA!” On the Deuce – hell, anywhere – people may move away from the brandishing of a knife, but folks haul ass at the sight of a gun. In a second, all hell broke loose as patrons trampled each other in a mad stampede for the exits. The chaos hit the lobby, where the theater’s manager was tossed down a flight of stairs while trying to stop the sloppy looting of the candy counter.

From The Recesses - The Beckoning

A Tale of Our Modern World in Four Parts
By John Rexer
Sunday, February 3rd, 2013

From The Recesses - A Cry of Barhounds