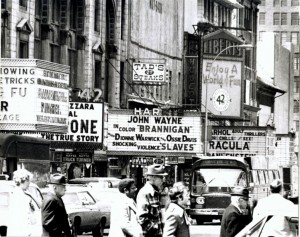 As the audience spilled into the street, a squad of New York’s Finest rolled in on horseback and foot with nightsticks swinging. A crowd gathered on either side of the strip to enjoy the action as skulls were thumped and random arrests were made. Nobody inside the theater had been shot or seriously hurt, and those who dodged the cops were now stampeding back inside expecting to watch the rest of the movie. Near the corner, a police horse kicked at an abandoned Kangol as it bent gently to sniff a crushed pack of Twizzlers.

The next night, nearly every theater on the strip was sporting shiny new airport-style metal detectors and hulking private security guards. It was the beginning of the end. By the early ‘90s, the fun was over for good.

If home video and studio economics didn’t kill single-screen theaters, then it certainly crippled them for life. And the fact is that by the late ’80s, the Deuce had already begun a slow death hastened by both the crack epidemic and New York City’s shady Urban Development Corporation, whose practices of ‘eminent domain’ ultimately handed over much of the street to the highest corporate bidders. One by one, the theaters closed. Some were restored. Others were demolished and replaced by new multiplexes. The faded and chipped wall murals from the ’50s that called 42nd Street ‘The Entertainment Capital Of The World’ were still visible in the late ‘90s, though ‘entertainment capital’ now meant something entirely different. Eventually, the street became little more than a glittering extension of chain-store clogged, big-business robbed Times Square. Rarely can I bring myself to go there today. The Deuce is now one big, evil Disney Strip Mall. In the most low-key riot of them all, 42nd Street was indeed brought down by a giant rat.

In the end, everyone on the road to Oz – as well as Travis Bickle – already had everything they needed or got what they ultimately deserved. We all do, more or less. But to this day, I still can conjure the memory musk of slow rot, laughing masses, skunk weed and orange soda. That it was fleeting does not mean it wasn’t meaningful, but that it had meaning was no guarantee of its permanence. The best sanctuary is where you find it, when you need it, and what you make of it, even if it is just a bunch of strange movies on a street of old theaters. There in the darkness, I’d seen the light.

Miles Afuera has lived in Manhattan and worked in the entertainment industry for nearly 30 years. He learned virtually everything he knows about urban survival and movie marketing on 42nd Street.

To read other stories From the Recesses, click here.

From The Recesses - God Gives a Wink

An Occurrence on The Wolfe Tone Bridge
By Michael Tallon
Tuesday, March 31st, 2015