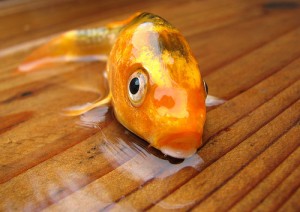 Years ago I was walking the streets of New York City with my youngest sister, when she said “Let’s have fish for dinner.”

I was in my early thirties. She was 15 years my junior and had come in from the suburbs where we both grew up.

I grabbed her hand and we began to weave our way south toward Chinatown and Canal Street where the fish market spilled from the shops directly into the street. It was nearing twilight. When we arrived, the streets and sidewalks in front of the shops were slick with a day’s worth of fish guts and blood that had been dumped out of the doors. You had to steady yourself and walk in little steps, or you’d slide to the pavement.

The smell of fish was so strong it burned the eyes. You felt the thickness of it in your throat and deep in your lungs. It was like low-tide-meets-a-sewer, then pumped through an oily vent where the oxygen had been extracted.

My sister and I went into one of the bigger shops and I saw a look of horror spread across her face.

Under florescent lights, Chinese men in white butcher’s coats splattered with blood hacked, sawed, sliced, and gutted every kind of fish known to man. Blue-white light bounced off the cleavers and knife blades.

Many of the fish were still alive, gasping and staring at you. And then they were not.

She was turning green.

On a table in front of us were fish with mouths agape, bulging eyes, fins slapping, their bodies kicking and contorting. They were stacked in plastic containers that had inches of water in them, or they were stretched over deathbeds of ice.

On the floor at our feet were buckets full of live frogs. Other buckets held live crabs. Others had snails, turtles and eels. In one there was something that looked like the bloody stubs of alligator paws.

Every inch of the place had something squirming, clawing, pulsing, bulging, bleeding or gasping. Every inch had something alive soon to be dead, or something dead that had just been alive. Blood sluiced off the steel tables and into the drains on the floor.

If these creatures could scream, the sound would have been deafening.

I was about to buy some crabs and a few red snapper, when my sister yanked my arm and said. “I’m going to get sick; I have to get out of here.”

She jerked me to the street.

So, without buying anything we walked out, and then quickly away from Chinatown. When the color was back in her cheeks, I said, “So, what about dinner?”

“Can’t we just get normal fish?” she said.

A few minutes later, we were in a clean, well-lit, well-merchandised Gristede’s grocery store. My sister walked over to the fish section and selected two frozen filets of flounder. We went back to my apartment and cooked them.

Between the idea and the reality falls the slaughterhouse: For thine is the kingdom.

From The Recesses - Horses and Cigarettes

From The Recesses - God Bless You Mr. Vonnegut

Or The Case For Positive Nihilism
By Michael Tallon
Wednesday, December 26th, 2007