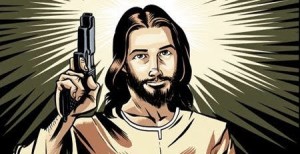 I have five male half-cousins. They are all much, much younger than I am. They are the grandchildren of my grandfather’s second marriage. I do not know them well, but I remember them as cute little boys. I also remember their father. I remember him as a bit simple, a bit authoritarian, and a bit foolish. He had big teeth and he was proud that he could smile widely, rap his teeth with his knuckles and play a tune.

When the boys were still little, he moved his family from New York to Virginia. They became born again Christians.  It caused a bit of commotion in the larger family, but off they went.

Recently, one of these cousins asked to friend me on Facebook. So I clicked on his page to see what he was up to before I hit “confirm.”

• “The road to peace is paved with war.”

I scrolled through his photos. There were many of him and his brothers, bare-chested, muscle-bound, pumped-up on steroids and too many hours weight-lifting.  They wore camouflage face paint and had bandanas around their heads.

I’m sure my young cousin has many good qualities. I trust he has a good heart. I’m sure he is well-intentioned . . .

Actually, I’m not entirely sure that he’s well-intentioned. When I look at his home page, I fear that it is the mirror of those belonging to legions of other young men, indoctrinated by too many hours of war movies, excessively violent video games, FOX News, a 5th rate education, mixed martial arts viewing, football, jingoistic sound bites and fundamentalist religion.

I fear the national body is full of such cancerous cells that are metastasizing at all ends. Each day there are more smiling, muscle-bound brutes who believe in God and Country, and are incapable of a critical thought. But they are ready to slaughter and promote slaughtering in the name of their flag and their God — someone who, it appears they’ve forgotten, preached a message of love.

I’ll “friend” my nephew. Why not? It is not a blood oath. No ritualistic killing is obliged. Who knows, I may need a Conservative Christian with an AK-47 at some point to get me out of a jam.

From The Recesses - Ruminations At A Wedding