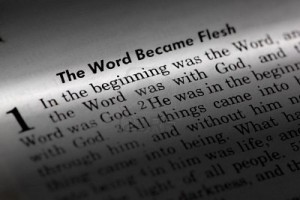 The Birth Of the Book – A Holy Rant

For almost 2000 years, on our half of the planet, when you said you were reading The Book, everybody knew which one you meant. And, it’s one Hell of a Book if ever there was, filled with subtext below subtext below subtext. Just take the first words of John. Not me, but the Evangelist.

The Word was with God? Then the Word was God? Forget the Song of Solomon, that’s some suggestively sexy scripture. By my reading, The Word and God got at it through some glorious, hermaphroditic auto-eroticism of self-pollination and ontological orgasmus, but begetting what?

Book both Demonic and Devine.

Book that delights itself between the covers and was (one presumes from its first breath) an enfant terrible, telling embarrassing truths about its parents (particularly God, that stuffy old patriarch) in front of the guests. Both parents, Word and God, must have feared Book’s pagan and patricidal tendencies from the start. In the ancient, ethereous aeons, long before Sophocles sat down to scribble, the rumblings of Oedipal rage echoed through the halls of heaven.

God probably would have been safe enough until Book started spending time with His other scion — Man. Man and Book soon grew beyond Word and God, creating New Men and New Books with every passing generation. Books became companions to Men. And New Men were the ever multiplying audience for New Books. The physical unity of Book and Man mirrors that of Word and God — that sublime, textual, sexual, terrible and terrific shared existence between idea and reality, between potency and existence, between essence and descent.

Book, without you, Man is a terrified and lonely creature. Book offers Man answers to the unanswerable and allows him to reach beyond himself, beyond his limited time. Book gives man his history and allows him to write his future. It is different than his relation with The Word or God. They are the progenitors. He and his Book are the present and coming generations — and Man abandons Book at his own great peril.

The Death of the Book – A Temporal Contemplation

Recently it occurred to me that the book, the physical book, with a cover and pages, is rapidly becoming a thing of the past, like God. And as with God, the worship of books may soon become an anachronism of tinier and tinier cults as decades pass on.

This would be sad beyond sad. I’ve learned to live without God. According to Nietzsche, he was gone a good 100 years before I showed up on the scene. Even though I was raised religiously, the whole process seemed cultish and reliquary — more sepulcher than cathedral. But the real soup in which I’d swum since my childhood was a hopeful nihilism, always buoyed by words, pages, libraries and bindings.

I’m not sure I can live without the book. Books give me hope and already (though I’m surrounded by parchment and print) I can already feel the cold, digital gloss as we communally click our culture into a world more virtual than visceral.

Though the e-book has been around for several years now, and though we have all become accustomed to getting our news, communication and entertainment from our laptops or some permutation thereof, the decline of the book in public spaces did not hit me until recently. I was in an airport waiting to catch a flight and there were hundreds of other people waiting at their gates, too. I took a book out of my bag, a dog-eared Cortázar, and began to read. I felt peculiar, but I didn’t understand why. I almost felt shabby. Then I looked about and then saw it: No one else was reading a book, just me, the quaint, slow to evolve, soon to be extinct Luddite.

There were a few people thumbing at magazines but most everyone else was checking their iPhones, or pecking away at laptops. They were all part of the great universal hug of over connectedness. I felt very out of place.

Five years ago this would not have been. Some, many, most of the travelers enjoying an afternoon in my coffee shop back then would have been reading books, talking about books, exchanging books, connecting through books.

I noticed the same thing a few months later while riding a subway in New York. Nearly every person on the train was texting or reading from smart phones. Ten years ago one would have seen The City reading to itself even during rush hour. The subway ride used to be one of the most oxymoronic experiences of the urban world: in the most public space in NYC, everyone could retreat into privacy to read for an extended length of time. Alternatively, you could look into a fragmentary window of The City’s soul by peering around the train at the covers of the books your fellow commuters were reading — Bibles, self-help books, technical manuals, legal texts, romance novels, Dan Brown. By looking at the cover of each of their books, you could know something about them and about your world. They were part of our shared space, signposts in the urban wilderness.

And each book’s cover was a sly invitation, a conversation starter, part of the stitching that held the old, odd quilt of a culture together.

Some might say the incipient disappearance of the book is no big thing, especially as digital media are allowing us to transport whole libraries in devices that weigh nary a few pounds. Some will say that people are still reading — perhaps more than ever — and now they have greater access to any text ever written.

True. As far as that goes — and I’ll stipulate that it goes a long way. But that is not the point.

Consider how much is being lost. The medium, the specific technology of a book, is so much more than the words its binding contains. A book is a totem, a talisman, a memento, a badge, a quiet comfort, and old friend, a personal extension, an aspiration, a piece of art, a legacy, a traveler. It is something to love, to covet, to care for and to come back to. It is a physical thing that can be bartered, abandoned, hunted down. Books are old loves and new ones. They are measures of self. Of what else do we say with such relish, “I was too young when I tried that book. Maybe I should give it another chance,”? Books are constancy and change. Inspiration and exhalation. Books respire, perspire and they can expire. They live. Their backs can be broken, and in the right hands, they can be brought back to life.