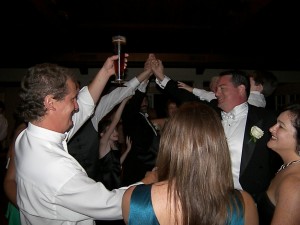 Sit on the deck chair of this club that otherwise wouldn’t let me in to park cars, much less as a member, and gaze inside with booze-frosted eyes, as if beholding a crux moment of a film shot by Haskell Wexler. Late summer cool cascades off the inlet on northern Long Island, rectangular lights of rich people’s windows lining the shore up and down, like stationary fireflies.

From the nearer windows, and here, in front of me, through sliding glass doors, an old Irish ballad pipes. The people inside gather into a circle, link arms to shoulders, sway a little, and they sing the song.

Of all the money e’er I had,

I spent it in good company.

And all the harm I’ve ever done,

Alas! it was to none but me.

They are my family, but not really, not by any of the requisite accidents of DNA. These moments, I have witnessed them before, but they are not mine. They are theirs. I’m “family,” in the necessary quote-marks. Norma, the swaying grande dame under the arm of the giant white-haired patriarch, the Great Man Who Helped Many in his storied career, she calls me her “other son.” The first time she did, years ago, I felt something, gratitude, sure, but more unworthiness. Because, look at them: this, the song, is something for them, because it is a rite they learned, they shared, they became, many years before they adopted me. I don’t know the words.

I played a couple of my own songs to send one of them, Eddie, and his new wife Kirsten off to their new life, which is much like the life they have been living except with some fucking clergyperson’s sanction upon it. Before that, I made sure the two of them are going to be the ones editing the photos yielded from the pearl-white wedding-tailored disposable cameras placed on each table, then I went into the bathroom stall to treat Eddie to a “private” contribution to their wedding memories. Norma and Mindy spotted me coming out of the head with camera in hand and a no-doubt telltale smirk on my face.

“What the hell are you up to?” Norma said.

I backed out to the smoking porch with cartoony hyperbole.

The Great Man hugs me a couple times when our paths cross, squeezes my shoulders, doesn’t say much. It is his way.

Mike, my best friend for twenty odd years now, came back from Guatemala, and we drank all week at the old bars in Chelsea and Kip’s Bay. New York brings the old crew out, different groupings of them night to night, pinballing us around. It wasn’t until tonight that we could just go outside and smoke and trade the insight each values so much in the other, out here on the deck of the Enemy Class, away from everything. Two yuppie assholes with cigars adjourn to our general smoking area to be those fucking guys who smoke cigars – one of them has the mini-guillotine implement you cut the tip off with – bully with each other as to how Romney was their last best hope, and Mike and I exchange looks of venom. As it is a wedding, we politely moved away instead of engaging a ferocious deconstructive tagteam as we might otherwise, especially when this drunk.

We found chairs, just outside the sliding doors into the dance floor, and argued Obama versus Gore, consensually dismissing Clinton as the cynical incarnation of the mandate the warmongers have handed our party. We not so secretly love Kucinich all the more. We predictably both want to fuck his wife.

But now the celebration inside the picture windows takes on the sepia richness by which everyone will truly remember the day, versus the staged pictures of people in their Sunday finest, of boilerplate moms hoisting boilerplate kids, the one of Mike’s hot girlfriend’s ass that, um, somebody took, even of the self-portrait of my own ass.

The strains of “The Parting Glass” seep out, and Mike says, whup, sorry, gotta go do this. And I sit, and I watch the circle form as naturally as a drop of water into a still pond, and listen.

But since it falls unto my lot,

That I should rise and you should  not,

I gently rise and softly call,

Good night and joy be with you all.

Steph finds me there and walks around me and rubs my shoulders and neck. “You should go in,” she says.

We never had that kind of thing, my family; no rituals other than facile ones my mom’s side of the family tried to cling to, kind of hamfistedly, that even when we gathered and sang Christmas carols or something, it came out cacophonous and spiritless. If you’ve ever been to a Midwestern church, it was kind of like that, a “celebration” of the blessings of God and creation with no real joy remotely evident in the act. Or was I just an angry, pissy, stupid young man and that’s how it seemed to me?

I don’t begrudge them anything, I grew up for want of nothing, typical menu of angst and fun and opportunity and repression and at least access to the wherewithal to overcome the obvious dullness of my early years. And I am not a Gaelophile or anything, nor do I bemoan the lack of identity to my uniformly German lineage – the last thing this world needs is any more German pride, ever. I mean, I don’t think there is anything intrinsically “better” about any culture, tradition or any random strain of DNA versus another – I consider the very idea, in fact, the bane of civil society.

But there is a beauty to this family that I never knew, never even crept into my consciousness, until I became part of it, until they chose me and I them. It is warmth and ease in moments like these. It is moments like these that make so evident just what I have let seep out of me, now, so far away from Norma and Jim and Mike and Eddie and JP, far from New York, back in what was home for so many years, amongst stoic Midwesterners, before it stopped being home. And it is not lost on me the meaning I now try to give such moments even as my own family devolves, dissipates, fades.

Back in Iowa in a few days, I will afford my father a little more time and patience, than I normally do. And I know exactly why.

Good night and joy be with you all.

From The Recesses - Keeping Us Safe at The Belmar

Zombies And The Zeitgeist
By Michael Tallon
Saturday, February 13th, 2016

From The Recesses - A Cry of Barhounds