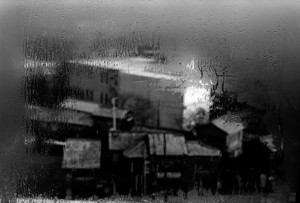 He sees the end, and that all his bluster and posturing, all the sword-wielding and skull-crushing and blood-drinking, all this shit will come to fuckall. In the end, he’ll die like everything else, everyone else, him, Thor, Frey and Freya, all the rogues, Fafnir the Giant-ass Wolf, Loki, the Midgard Serpent, and the Earth and the heavens and the World Tree will burn in the flame of Surt The Fucking Fire Giant. Everything green, everything beautiful, everything living, snuffed out in the blaze of battle between these monolithic assholes. Big fucking mess as Apocalypses go. All consumed by Odin’s own bloody fucking raison d’être. He sees all this in his flash, and — flash — he’s transformed from the god of war into the god of war and wisdom and poetry. He changes.

In the old woodcuts — get out of here, seriously, go dig em up in the library — you see him with the eyepatch on his socket, with this sullen visage, with empty goblets at his feet. If you don’t see “Odin” or “Wotan” in the caption, this guy could be anybody, MacBeth at the end of his rope, Jesus in the desert, knowing his fate on the cross, Arthur, doomed by his own incest and naiveté, hell, back to the first of them, Gilgamesh. Pick your tragic warrior-king. It’s been done before by, y’know, everyone. But Odin, he wanders, shitfaced, defeated, for the rest of his days, which, immortal or not, he’s still got to live out, because it’s all right there in the vision.

Anyway, he, Odin, he fights his battles, but without pleasure, no more lust, no more glory, all gone like fading trumpets. No sentiment clouding his mind, except, of course, the inevitable tragedy of man and god. He becomes the pure warrior, without pride, without hope, and he takes to the mead. We know him, right? Drunk almost every waking moment. Looking for peace in the booze.

Looking for enlightenment in oblivion, Buddha under the Bodhi tree. Another tree of knowledge. This is not coincidence.

Trace the Nordic tribes back to the Indus River valley from which all our misbegotten Euro-degenerate self-satisfied hillbillies hail, and you will find that the etymology of the word “Odin” tracks back to various forms, Woden, Wodan, Wotan, Wuotan, whatever. All of these approximate something like “wood” or “wind,” which anthro-linguists have figured, after millennia of migration, equates roughly to the Tamulic method of pronouncing “Buddha.”

Awareness came with a rhythm, a soft pulse against the window. The hemisphere warmed and the great atmospheric churn off the Great Lakes dropped its payload, the same payload it had dropped for four months, and yet, in the action, undoing all its previous actions. The hills and the valley became a vast water system that began in the sky and didn’t end until the ocean. When it rains, the water system becomes everything you can see. When it rains, you see people scuttle like bugs and rats, running to their cars, or hiding under awnings, popping umbrellas and newspapers over their head to spare them their inclusion in the system. They have this idea that they are distinct units and separate from the vital component that makes them the incomprehensible machine they are. And yet they run, a vain and stupid effort. They run, convinced (by whom?) that the water that composes them and cleans them and nourishes them is discomforting and inconvenient to maintaining the appearance they work so diligently to present in public.

When it rains, the water system becomes everything you can see. If the system has become everything, then people who run from it are running from everything.

How the hell do you get your bearings when you run from everything?

I could even feel myself smile when I recognized it as rain. It felt like home, which otherwise, as my days became more lucid, seemed far away.

“It’s been hard on you,” she said. Her voice was silken, the words deliberative, as if she formed the sentence before speaking it.

“It helps to think in those terms, doesn’t it?” she said. “That stories have endings.”

“Helps to compartmentalize,” she said. “That’s what stories are. Baby steps. Healing. The oldest medicine. Re-situating us, re-aligning.”

Her hand seemed almost to warm in mine. “To get us through the night,” she said. “To see the dawn again.”