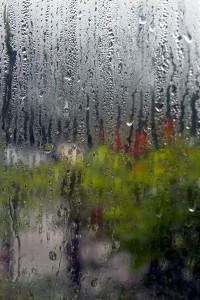 He sat in the dark, somewhere to my left. I couldn’t see him. The times I found myself displaced and confused, I initially thought the words came from the other people in the room. But then I realized they weren’t really in the room, they just had been at some point in time, because morphine sees into the past. So I closed my eyes.

We come from the same place, same myths, same “values” in some form or another. All society, after all, is based on common sense, at its deepest roots. People figured out at some point they could each kill a deer and live another week or they could all surround a mastodon and live through the winter. Figured it out all on their own, no messiahs around to claim divine guidance, or at least their unctuous little yes-men — shit get passed down because it works. If it doesn’t, well, it doesn’t, because they’re dead.

Jesus was a goddamn Buddhist, Siddartha Gautama was a goddamn Hindu, and Hindus were once paleo-historic proto-Zoroastrians, who were Africans-once-or-twice-removed — or some meandering family tree-thereof. The flood myth, the snake god, the trickster, the redeemer king who descends to walk among man, the martyr to our enlightenment, they appear in every corner of the world, emanating out of countless oral traditions. They go back almost to the first word grunted and first hunk of coal rubbed against a cave wall. Don’t tell the Christians though, they fucking hate to find out they’re not special.

Their myth, ours — whoever us is at the time — same goddamn thing, with a few names changed to protect the innocent. One branch of the family looks to achieve not-being through detachment from self and inward deliberation, in order to act rightly against the suffering of the world. Another — once you remove the venal, self-important repressive apparatus of the clergy from the conversation — diminishes the self by way of a Jewish revolutionary who told us that God lay within all of us as much as him and we might act accordingly. Another one rips his eye out of his head and gets shitfaced to abide the misery that is his gift to the world. All seek the same thing:

To quiet the swaggering, sniping dick part of us. To put that part of us in context of a world, of a universe, that just doesn’t give a shit that we are not dust or that we soon will be. To get us back to Eden. Liberation from fear. From artifice. Liberation from the world, into the world. To be a part of it again, not a virus preying upon it.

See, bubbeleh, the story doesn’t end with Ragnarok. Mythological apocalypses tend to disappoint, because if everything ended, the fuck are we doing here telling the story, right?

So anyway, meanwhile back at the apocalyptic fire, it consumed everything that lived and laid waste to the world and the heavens — except for two people. A man and a woman, Lifthrasir and Lif. And amid all the carnage, they stumble into a grove called Hodmimir’s Wood, ancient, solid ash trees that resisted the fire and protected them. And as the self-appointed forces of good and evil gnashed and growled and spat poison and shook the heavens and earth, destroying everything, Lif and Lifthrasir lay safe in each other’s arms. Eventually fell asleep. Slept for a thousand years. When they woke up, the gods and the demons, whichever was which — they both achieved the same stupid bloody end, after all — were long dead, and the world had grown green again, and the last-and-first two people fed themselves (this is how they tell it) on the morning dew.

But you know that story, right?

All stories are the same, because all storytellers are the same. More or less, anyway. Come from the same place. Bumbled through the same shit. Fought the same mortality. And everyone has a story, because we’re all going the same way — conspicuous side-effect of time. The retarded shit is where assholes think they can change the ending. That they can roll time back, do things that don’t do anybody any good and expect different results. We’re fighting these wars out there, all over the fucking planet, against Muslims, against Marxists, against tribal fucking chieftains, still. Fucking believe that?

We fight when society fails. That’s all fighting is, right? It’s where somebody didn’t get socialized enough and steals the toys, because they think they deserve to be king of the sandbox. Simple sensible stories we’ve been writing forever, in our different corners, all pointing in the same direction, which is how to play together — somebody decides their story is better, which sort of obviates the point of it. Civility is shouted down by the din of tribalism, plentiful land and food and enterprise somehow become not, war drums thunder again, drowning out any means common sense might prescribe to solve the problem. We kill over dribs and drabs of the stories, dribs and drabs they’ve written in gold leaf, sentence fragments they’ve adorned with rubies and decided to call the final word of God. But no single story is Truth.

The truth is in the pattern.

It is dependent on all of us.

“Fella ain’t got a soul of his own. Just a little piece of a big soul. One big soul that belongs to everybody.”

Go tell Tom Joad, we have learned fucking nothing.

He stopped talking, most likely a momentary thing. I tried to speak and coughed. Water appeared. One of the ghosts brought it to me. I sipped.

“Why bother what?” he said.

“Telling the stories?” I said.

“Dumbass,” he said. “So that somebody else tells them.”

“Even though we learn nothing,” I said.

“Why did they bother?” I said.

“Somebody’s got to light the fires,” he said, “for when the lost tribes come home.”

What words I remember her speaking I never saw her speak. I just remember the smell of violet and the dark voice close, almost like telepathy, or an angel’s murmur, but I could feel the warm breath on my cheek and neck.

Matthew Grimm is a freelance writer currently living in Iowa City, Iowa. He should be encouraged to visit his best friend in Antigua by ALL OF YOU! More of his work can be read at www.redsmear.com