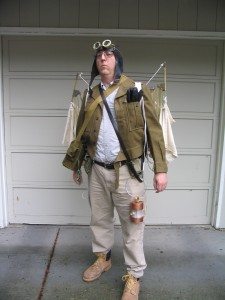 Smoke hung in the bar and wafted around between the clustered, colored lights like an addictive fog. David watched. It was pleasing. Other than that things were turning out pretty shit.

He sat and pondered the call he had received an hour earlier. Rox. It had been almost four months since he had heard anything from the sociopathic bastard. He stared at his still full beer and tried to piece the thing together, clearly a futile task. Vodka Rox was jabbering and raving on the other end of a scratchy line from God-knows-not-where about ‘mammal sovereignty’ and the ‘amphibious threat from our excessively coddled and protected wetlands’. David had agreed to meet him out of sheer curiosity. Now, after a forty-five minute drive to a shithole bar with warm beer and slanted stools only to find out that the crazy asshole was late, yet again. He was kicking the cat in himself and hoping his curiosity wouldn’t kill him. It easily could considering the man he had come to meet.

Vodka Rox. Everyone agreed it wasn’t his real name. How could it be? What parent would willingly bequeath such a burden upon their child? A moniker virtually guaranteed to breed alcoholism? But if not a given name, then how was the alias acquired? The man only drank whiskey. And that always neat. Apart from a taste for malted barley, very little was known about him. Where he came from, why he constantly employed exotic accents and changed his signature with every use. What criminal record he might be running from? All that remained a mystery.

David looked up and surveyed his surroundings: Three greasy old men sat at the bar with the dull eyes and bored postures of patrons who know their place in this world down to a specific stool in a specific shithole bar. The bartender, even greasier than the customers, stared blankly at a basketball game on a small, corner-mounted screen in front of a set of shelves half-full of half-full bottles half-covered in dust. There were three tables besides his own, which he had chosen for its obscurity in the far corner as well as for its thick patina of mites and flotsam, which suggested that no one had used it in weeks and it was therefore most likely not contaminated with ringworm or herpes or some other malady common to the type of people who frequented dives like this.

He had lost himself in his ruminations when the rusted-rat squeak of the door brought him back. There, in the doorway, wearing jodhpurs, a scarf, heavy black boots, leather gloves, and aviator goggles, splattered from head to toe with a brown, creamy looking substance, was the man, the legend, the utterly insane imbecile, Vodka Rox. He surveyed the room, spotted David, walked towards the corner table, sat down heavily and said, “Where’s my whiskey?”

David could only stare. He took a gulp of his beer and stared some more.

Rox pivoted in his chair. “Barhop! A whiskey! You forgot my whiskey!” He turned back. “You did order me one, yes? That scummy shit just forgot about it. I thought so.” The bartender had almost managed to tear his concentration from the static on the screen when Vodka spoke up again, louder this time. “Ah never mind about it ya scummy shit! Just admit you forgot, it’s alright. I’ll even come to the bar for it. I expect a good pour though, you god damned incompetent!” He began to rise just as David found his voice.

“What the hell are you wearing? Did you buy a motorcycle? Christ that’s all you need is…”

“No no no. I came in the Volvo. These are my swamp clothes. For the swamp.”

“Jodhpurs and riding goggles? How are those swamp clothes, you crazy fu…”

“Look man! It doesn’t matter anymore! I was mistaken in my identification of the nature of this particular threat! We’re not going to a swamp! Not anymore! It would be pointless! Hang on, let me get my whiskey.” He wheeled toward the bar, just in time to miss the bartender spitting into his glass.

David did his best to listen in during the exchange at the bar. “What! TIP YOU!? He ordered the drink didn’t he? YOU…FORGOT it! There was a pause during which bartender muttered something inaudible. “OH! You fuck! I know he ordered the drink! He told me he did!” The bartender whispered something in his ear. Vodka glanced back and nodded to me, then to the bartender and returned to the table. “Look, I’m sorry but it’s going to have to go on you’re tab. And he’s putting an extra 20 bucks on there too for something or other. Not kicking us out, I think.”