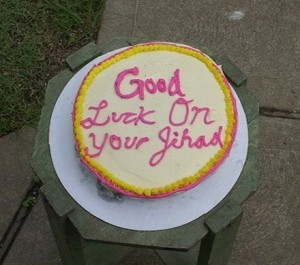 &#8220;What!” David looked towards the bar but its tender had returned his concentration to the snowy screen. “You made me drive all the way out here and then you piss off the bartend..”

“Yes! It is! It’s important right now! You come in here, LATE, and…Stop rolling your eyes at me! Who do you think..”

“Man, I was just hit by a cake!” Rox leaned over the table and stared at him. The aviator goggles on his forehead pushed his dark brown hair into an obscene kind of frontal Mohawk. David looked back, again noticing the brown flecks coating the man across the table from him. He slumped down in his chair. Jesus, it’s frosting.

“No. The cake hit me,” Vodka said. Then he took a long slow sip from his whiskey and spit, leaned back in his chair and looked knowingly across at David. David took a slow gulp from his now warmer beer and looked back.

“No one. You can’t just throw a six foot tall, double tiered German Chocolate cake. The thing must have weighed thousands of pounds.” He took another sip from his drink. “You know, German Chocolate is a relatively dense cake as far as cakes..”

“What the fuck are you fucking talking about you fuck wit you can’t fucking get hit by a fucking cake and fucking say it was six fucking feet fucking tall and then….” He stopped, breathing heavily, and then, realizing that he had just employed the word ‘fuck’ eight times in the previous five seconds, let his head fall into his hands and sighed heavily. It’s OK.

David thought back to his last absurd Vodka Rox related situation, when he had received an hysterical phone call at seven a.m., and Vodka, for some reason employing a bizarre and poorly reproduced southern-hay seed accent, had explained that while “huntin’ in sum shrubs ‘n thickets fer jewels” he had accidently “trod on a groun’ nest all fulla a pile uh eggs and smushed ’em all up and they had veins ‘n feathers in ’em”.

On that occasion he had eased Vodka’s grief by convincing him that most ground nesting birds are in fact reincarnated Hare Krishna’s, and by killing them early he could only move them up the karmic ladder. So he had done them a favor really. David racked his mind for an equally lunatic explanation for the current situation. Something that Vodka could grasp, hold on to, something he could understand. Coming up empty he loosed another sigh and looked up. Rox, still calm, still collected, swirled the spit deeper into his whiskey and cleared his throat.

“It was animate. Possibly ambulatory.”

“NO IT WASN’T FU…” OK, it’s OK. David began again, calmly this time. “Alright, Vodka. It was animate. Let’s go back to the beginning. I have two very important questions for you. Why did you feel the need to involve me, and isn’t this something you could have explained over the phone?”

“No, no. This just happened on the way here. I only involved you in the first place because I thought the amphibian thing was going to be a problem. You have some frog-catching skills as I recall.”

“Frog catching skills? I haven’t caught a frog since..”

“Never mind. That’s not important now. Not in light of this cake incident. The frogs were just a red herring. A ruse designed to throw me while this whole pastry plot was being designed.”

“That’s what we need to figure out. We’re going to get into my Volvo and visit every bakery between here and Florida! Don’t worry there’s plenty of room for your gear.”

“It’s swamp gear, actually. I brought you a shit load of gear. But I think it can be modified for bakery operations. We’ll have to get bigger nets of course and..”

“Wait….” It’s OK. It’s going to be OK. “”Go back to the part where a giant cake hit you. I feel like I still need some clarification on that.”

“Sure!” Said Vodka, sucking down the last of his whiskey spiked saliva. “You see, I was on my way here, and I was a little late so I decided to get off the freeway an exit early and take Middle Fork Road.”

“But that takes longer.”

“True, but it’s far more scenic. And I figured you would be mad, so I wanted the extra minutes to collect my thoughts as far as this amphibian business. You know, so I could really wow you. Anyway. I came around a curve and there’s this six foot cake taking up all of the right lane and part of the left. Now, you know me, I’m never one to turn down free cake, so I pulled over, and got out of the car to approach it.”

“And did it occur to you at this point to wonder what such a tremendous cake was doing on Middle Fork Road in the middle of bumble-fuck nowhere at eight thirty on a Tuesday night?”

“Well, of course I wondered! But I figured, you know, choosers shouldn’t beg or whatever, and it looked like a good cake, so I went up to it and it hit me! It reached out with a pseudonym…”

“Right. Pseudopod. And it struck me in the face! A glancing blow, thank God! Good reflexes on my end. Needless to say I ran back to the car and sped around the chocolate terror. Going the wrong way and everything!” He sat back looking very pleased with himself. “So what we need to figure out is just who might be capable of such a thing.”

“Christ! You’re right! Nobody on the planet. That leaves only one option! Extra-terrestrials! They’re here! They hate us, but they love our cake! I’m going to the sheriff’s station to get the number for The Pentagon. Meet me there in ten minutes!” And suddenly he was gone. The rat-rust door squeaked shut and all was as it had been.

“Sure dip shit. I’ll meet you there.” David stood and started walking towards the bar, fully aware that he would have to pay for two drinks plus an extra twenty bucks just to get out the door. “Crazy, crazy bastard.” He muttered.

Vodka never made it to the sheriff’s office. He encountered a 60 foot long slice of angry lemon meringue pie and was never heard from again. Clearly, he knew too much. Not that it would have mattered, because Vodka was wrong. But so was David. It wasn’t aliens. It was Islamic fundamentalists. They were originally going to use giant breakfast foods as a delivery device until realizing that using American breakfasts would require handling pork products.

So they went with the cake thing.