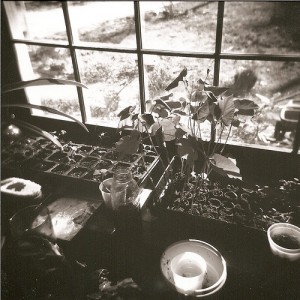 Morning is their favorite time together. It is the only time of day when the east-facing window gets direct sunlight and the fresh upslope wind blows from the city below, entwining their foliage in an intimate wind dance. Juan, a spider plant and Rafael, an ornamental palm, are friends and have been growing together on the same windowsill since they were seedlings.

Their place of birth is the kitchen window in a makeshift apartment that was built atop the roof of the Juarez family’s home on Fortune Hill, overlooking the city of Oaxaca in Southern Mexico. The Juarez family rents this spare room to an Old Norwegian expatriate named Anders. It is Anders who takes care of Juan and Rafael.

Every morning the old man has the same routine. He gets up an hour after the sun rises and turns on his radio. The Latin beat of the Cumbia compliments the two friends in their morning dance. The plants enjoy the rich smell of coffee wafting up as Anders brews it right below their windowsill. Anders pours a little water into both of their pots whispering the same, reassuring words of encouragement every morning

Then, still in his underpants, the old man moves out into the sun to enjoy his coffee, a cigarette and the rooftop view of Oaxaca. Following this ritual of sunshine, caffeine and nicotine, Anders gets dressed, brushes his teeth, picks up his handmade Oaxacan briefcase and heads to the Zócalo, the town square. There, in the shade of Laurel trees, the retired professor sits at the same café each morning. And each morning musicians playing the marimba circulate from café to café for tourists.

While dipping fresh bread into Oaxacan hot chocolate he delves into D.H. Lawrence or El Pais, which, according to Anders,  is the only good newspaper in town. His head is buried in his readings; he only looks up when a beautiful Mexican woman walks by.

While Anders is in the Zócalo the two plants are left to themselves on their peaceful sill. Often the old friends share long conversations. At  times they just enjoy each other’s company, mutually listening to the sounds of Southern Mexico rising from the city below. They hear the bells ringing from the cathedrals and the man selling water, who yells:

They are careful to listen for the whistling of the bottlerockets that go off throughout the day and into the night because they are always followed by rude explosions that shock the friends to their roots. They hear the roar of buses heading up Crespo Street spewing noxious diesel fumes.

This was life as they knew it – and they were fully content until the day they awoke to see the new poster on the kitchen wall.

It was a painting by Monet that Anders must have put up during the night when the friends were sleeping. It was a work of art that portrayed a garden so lush it was as if plants were the only living creatures on earth. The old friends were awestruck.

After some time Rafael said to Juan,

“My friend all we really know is this windowsill.”

Juan thought about this as his foliage shivered in the wind.

Paul Staley is a traveling writer, currently living in Oaxaca. He passed through Antigua a few months back, drank some Mezcal and felt at home. He graciously submitted this story and we hope to see more of both him and his writing very soon.