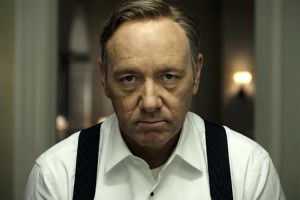 Speaking this evening to reporters in a hastily called press conference outside of The Tune Inn, a popular Capitol Hill bar, House Speaker John Boehner (R-Ohio) blasted Beau Willimon, the writer, director and creative force behind the hit series, House of Cards, for “his typical, Hollywood-hypocrisy,” and the “left-wing extremism he is forcing down the throats of the American people with this thinly veiled attack on the Republican Party.”

The series, based in Washington, DC, follows the self-serving, amoral, power-hungry anti-hero, Francis Underwood (Kevin Spacey), as he moves from his position as the House Majority Whip, inexorable closer to epicenters of power in the United States government — carving a swath of death and destruction as he does so.

Boehner noted that “although Francis Underwood is written as a ruthless, amoral, power-obsessed, Democratic Congressman from South Carolina, it is lost on no one here that he is an obvious caricature of a self-serving, amoral, power-hungry Republican Congressman from anywhere.” He emphasized that “No one here buys for a minute that Underwood is a Democrat. Really. No one.”

In a rare show of bipartisan support, several Congressmen from both parties who had gathered behind the Speaker as they noticed the lights and cameras in front of the bar, all nodded in agreement.

Speaker Boehner, somewhat unsteady on his feet, his head swiveling between the Congressmen behind him and the reporters in front of him said, “I mean, really, come on! This Underwood character is as oily as my friend [House Majority Leader, Eric] Cantor, here.”

The Speaker put his arm around Majority Leader Cantor’s neck, in a half-aggressive, half-friendly embrace and said, “Just like with this bastard, you can actually imagine Underwood sticking a knife in your back when you turn around. Some of the Democrats around here are true sons-a-bitches, but not a one of them is as Machiavellian as Cantor. Or Underwood! But Republicans? Guys like them are a dime a dozen, and everyone knows it! Isn’t that right Eric?”

The Speaker appeared to then give the Majority Leader what is colloquially referred to as “a noogie.” After a few seconds of this horseplay, Majority Leader Cantor managed to extricate himself from the attentions of the Speaker while continuing to maintain a steady smile for the cameras.

Speaker Boehner then, with a noticeable stage whisper, said, “You boys and gals might not believe it, but the talk around the little Congressmen’s room is that [Senator Ted] Cruz (R-TX) has a life-size cutout of [Kevin] Spacey in his dressing room instead of a mirror.”

Both the Congressmen and the gaggle of reporters covering the press conference attempted to stifle laughter at this, but were unsuccessful.

Speaker Boehner pressed on, “See! You guys know it better than anyone! No matter what Willimon and the rest of those Hollywood liberals say, or how the damn show is written, Underwood is a Republican to the core. And as a Republican Leader, I feel compelled to call out this treatment by the lame-stream media. Beau Willimon and the rest of his namby-pamby liberals should be put on notice. Republicans will not be caricatured, and we know when we’re being caricatured, even when we’re not. Got it?”

The Speaker then returned to the bar and called for drinks on the House.

Reached for a comment later in the day, Willimon noted, “I honestly don’t understand how Speaker Boehner could possibly mistake our fictionalized world for the one in which he lives and works. The Congress of Francis Underwood actually gets shit done.”