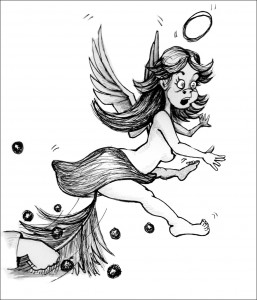 We did celebrate the holidays, too. Easter was all bunnies and chocolate eggs, and Lent was a word I had heard somewhere. But as a family, we did (and still do) buy into Christmas a bit more than the other big days on the Christian calender. It is after all the most important, what with the birth of Christ having been arbitrarily placed on December 25th in order to coincide with the already popular pagan mid-winter festivals, thus easing the conversion of the peoples of eastern Europe.

So every year we get a tree and put lights on it and decorate it with a variety of hideous ornaments that my brother and I created through sheer talent and will power during the long, hot hours of our preschool craft time.

We top our tree with an angel, and every year as my mother pulls out the realistically-rendered, red-robed heavenly guardian she bought about ten years back (and I push hard in favor of the chintzy, haloed female figure my great-grandmother made god-knows-when out of gold wire and a plastic champagne glass) my father clears his throat and asks: “Did I ever tell you the story of how the angel got on top of the Christmas tree?”

It is one of my most cherished Christmas traditions, and one I would like to share. So allow me to present, to the best of my ability, my father’s story of How the Angel Got on Top of the Christmas Tree.

It was Christmas Eve at the North Pole, and Santa Claus, as is not unusual for a man of his carriage in a high-stress position, was on the verge of a massive coronary. Or an aneurism. Or possibly both. He had just discovered 653 pages of the naughty – nice list wedged between the cushions of his sofa, and while most of the children on it were naughty, he was still short almost 17,000 gifts. He was contemplating reinstating a plan he had used once years before wherein toys already belonging to naughty children are stolen and re-gifted to nice ones, when a gruff, older elf approached him carrying a rocking horse fitted with a saddle made from old glow-in-the-dark watch hands.

“Yeah, what is it?” asked Santa, turning to look. “Great God in Heaven! What were you little morons thinking?!”

“Well,” said the elf, “ever since this whole Indiglo thing came up, we don’t really have a lot of call for the old glowing hands, so we thought maybe, you know, this might work. They’re a little pointy, but…”

“They’re not just pointy, you nit-wit! They’re radioactive!” He slumped down onto a nearby bench. “Christ, if that one ever gets out…”

“Now Santa, not a single cancer-related death was ever positively linked to our watches. Besides, remember in the 50’s? We used to stuff stockings with cartons of Lucky Strikes.”

At this Santa sprang back to his feet, suddenly fuming. “It doesn’t Goddamn matter about one rocking horse! I’m THOUSANDS of gifts short!”

“Well, why don’t you just take them from the naughty kids again and…”

“And have INTERPOL back up my ass?” Bellowed Santa. “They’re still after me from the last time! Get out of here! Get that thing away from me!” At this the elf tucked the possibly leukemia-inducing rocking horse under his arm and scurried out of sight. Santa paced back and forth, breathing deeply, lacking even the patience to go out and check the reins on the sleigh, an act that usually calmed him down.

Just then one of the little Christmas Angels approached him. Santa disliked this particular Angel quite a lot. A little, vacuous, blonde thing named Tiffany with a habit of talking about incredibly inane subjects for long periods of time without ever pausing, even to breathe. “Santa! Santa!” she shouted. “Santa, Vixen is sick so she’s not givin’ it up and Blitzen, you know how he gets frustrated quickly. Well, he got to feeling a little randy and he tried to hop up on Prancer which pissed Dancer right off even though Dasher told me that Dancer told him that things between he and Prancer aren’t even going that well lately and he’s thinking about asking for a new place in the lineup but anyway he socked Blitzen a good one and . . .”

“ENOUGH!” roared Santa! “Just grab the cattle prod and tell those sniveling sacks of crap to get their game faces on! It’s Christmas freaking EVE!”

The little angel staggered back a few steps, eyes wide, and then skittered off through the nearest door. Santa found himself alone once again, but couldn’t calm down. He stood with clenched fists and shouted at nobody. 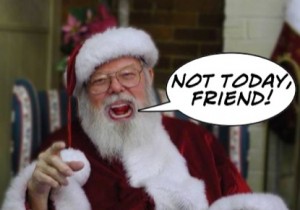 But just as he was really hitting his stride, an overweight elf with a ruddy beard came sprinting to his side, panting.

“Santa! Remember last year when we had that Beanie Baby debacle? Well you’ll never guess what happened. That same group of elves who insisted on making the those stupid little animal dolls, well, do you know what they’ve been doing for the past six months? You won’t believe it. They’ve been making Lite Brites! No one has asked for a Lite Brite since 1989!”

Santa stood, almost at attention, his red face slowly turning mauve, his fists clenched so hard his nails were drawing blood from his palms, mouthing obscenities to himself. The fat little elf carried on, oblivious. “We have thousands of Lite Brites now and nothing to do with them. So here’s what I’m thinking: we take the little colored pieces that you plug into the board, and we use them as the insides of kaleidoscopes. All we have to do is take our old telescopes, and..”

“ARE YOU A COMPLETE IDIOT?????????” screamed Santa, spittle flying into his beard and dewing up his whiskers. “KALEIDOFUCKINGSCOPES!?!”

“OK, OK,” said the elf, his voice trembling. I have another plan. We could use them to make interesting new weapons for this year’s crop of Mighty Morphin’ Power Rangers.”

“Oh, well yes,” replied Santa calmly. “That would work perfectly. Get right on that.”

“See? I knew everything would work out. All it takes is cheer and a little Christmas Spirit and..”

“BUT FIRST TELL ME WHY IN THE HELL DO WE HAVE MIGHTY MORPHIN’ POWER RANGERS??”

The elf jumped back startled as St. Nick, not at his jolliest, continued his tirade.

“Why don’t you just go back to making blasted JACKS?? Or MARBLES?? SIX MONTHS?? They were supposed to be making FS4s! How did no one notice this? LITE BRITE? Get away from me!” yelled Santa, unaware that the elf had already run for cover.

Just then he felt a tiny little tugging on the edge of his robe, and there, at his feet, was Susie, the littlest Angel of all. Sweet little Susie. Always positive, always kind, and always willing to do anything that Santa asked. She looked up with big round eyes at Santa’s clenched jaw, red face, and the y-shaped artery pulsing in his forehead at an alarming rate.

Susie, in her innocence, failed to recognize these signs of explosive rage, and reaching down she grasped with her tiny hands the top of a Christmas tree she had been dragging over to him.

“Santa?” She asked, holding the top of the tree aloft for him to see, “What should I do wif dis?”

And that’s how the angel got on top of the Christmas tree.

Then my father laughs. My brother and I laugh. My mother sighs and tops off her Baileys. When she goes into the kitchen for more ice I switch the Angel on the top of our tree, restoring my great grandmother’s plastic champagne glass Angel, the tiniest Angel of all, to her rightful place. Keeping that Christmas tree right where Santa told her to shove it all those years ago.

Kevin Petrie doesn’t blame any of his various twisted sensibilities on his father, though he probably should.  He prefers to blame them on his brother.

Grace and Empathy from a Beautiful Stranger
By Michael Tallon
Thursday, December 24th, 2015