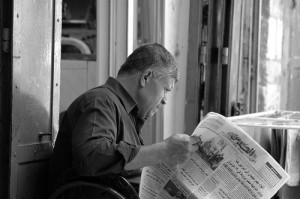 Levy scratched his head and thought, then, said, “Obama! I want to meet President Obama.”

Moishe pulled out his phone and hit another speed dial. Almost immediately a car arrived and the driver requested they get in. They were driven to Laguardia where a private jet was waiting them, and within two hours they were at the front door of the White House.

President Obama greeted them at the front door, warmly embracing Moishe with two kisses. He then turned to Levy and said, “Allow me to introduce myself, I’m Barack, and any friend of Moishe’s is a friend of mine.”

President Obama turned back to Moishe and apologized being so busy and he asked Moishe for a favor. “Moishe,” he said, “we’re having a hell of a time with Iran these days. Do you think you could make a call to the Ayatollah and see if we could arrange a sit down?”

“For you, Mr. President, anything. I’ll call him tomorrow morning. Early. He’s a friend, but with all the Death to Israel nonsense he spouts, I’d love to wake him up early. He hates waking up early,” said Moishe.

They all laughed, Levy a bit nervously, and the President begged Moishe’s pardon and said he had to meet with the Joint Chiefs. “Moishe, you’re like a father to me. Drop by next time you’re in town. Bring Levy with you.”

As they walked down back through the portico, Moishe gave his “see that” gesture with his shoulders and asked Levy, “Are you satisfied?”

Levy responded, “Look, Moishe, sure, you know the two black boys, and the mayor and the president, but you sure as hell don’t know the Ayatollah.”

“Prove it to me. Take me to Tehran!” Levy practically shouted.

“Oh, Levy… don’t you watch the news? It’s not safe for Muslims in Iran right now. And you wanna go? Two old Jews? We’ll get killed! Well… not me, but YOU would get killed for sure.”

“Ahrrrgg, I knew it! You’re a liar, Moishe. An, exaggerating Shmendrik, just like when you were a kid!” cried Levy.

“And you, Levy, just like in the old days, are a foolish Kolboynick. But, you’ve offended my honor, so I’ll take you to Tehran. But that’s it. Then we’re through!” shouted Moishe.

In a huff, Moishe grabbed his phone, made some arrangements, and soon enough, a car arrived to the front door of the White House and whisked them away to Dulles International Airport.

“You’ll see,” said Moishe as he pulled his had down around his eyes, and drifted off to sleep.

When they arrived in Tehran, the city was in flames. Riots were going on on all sides. A prearranged car was waiting for them at the airport, and Moishe asked to be taken to Azadi Square. It was Friday, just before prayer time.

When they arrived, Moishe said, “Levy, you’ve got to understand how dangerous this is. We’re two Jews in Iran, and while the Ayatollah knows me, no one knows you. You’d be killed if I tried to get you past his guards. So here’s what we’re gonna do. You stay here, try to blend. I’m gonna go meet the Ayatollah. You keep your eyes fixed on that balcony. In a few minutes, the Ayatollah and me will come out before the crowd and before he starts his prayers, we’ll wave at you. Just don’t move from right here!”

Levy, a bit worried all of a sudden, agreed and Moishe disappeared through the crowd of loyal supporters of the regime. And sure enough, about 10 minutes later, on the balcony appeared Moishe and the Ayatollah.

Moishe looked down into the crowd, right to where he’d left Levy, but Levy was nowhere to be seen. Moishe, in a panic, excused himself and started to move as fast as possible, back down to the square, cursing himself the whole time, “Moishe, you meshugener, why did you bring Levy here… why did you call him a kolboynick.. why, why, why…”

He fought through the crowd of devout Muslims fiercely, to the spot where he had left Levy, and there he found him, lying flat on his back, completely unconscious.

“Ahhhhh, G-d help us! Levy, Levy, you’re no kolboynick, your a mensch if ever I knew one… my old friend, my old friend… don’t leave me now!” he wailed as he took Levy’s head in his hands. Moishe gently slapped Levy’s face to rouse him, crying again, “Levy, my brother, my bubbee, wake up, please!”

And as he did, Levy’s eyes lolled open.

Levy looked his old friend in the eye and said, “Moishe, I guess I just passed out. Everything was fine until this young goyim tapped me on the shoulder and said, “Hey, who’s that guy up there in the white with Moishe?”

And here’s just one more quicky, for the road.

An old Jewish man is sitting on the subway, reading an Arabic newspaper. Unexpectedly, one of his friends gets on the train at 82nd Street. He sees his friend reading and says, “Levy… what the hell are you doing reading that terrible thing?”

Levy responds, “Oh, this Moishe? Vel.. I useta read the Jewish newspapers, and what did I find? Jews in poverty. Israel under attack. Jews being killed all over the world. Jews being forced to move from their homes.

“But what do I read here? Jews control the media. All Jews are all rich. Jews can make the President of the United States do anything they want… Ehh, It’s better news.”

Thank you, thank you, ladies and germs. I’ll be here all week. Try the roast beef…

Kids Today Need to be Taught How To Drink!
By Art Hoppe
Monday, April 2nd, 2012