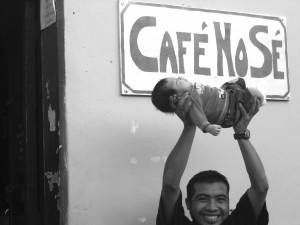 The cute little bugger to the left is Diego Efrain Garcia Aguilar. He’s the two month old miracle of our bartender, Robin.  Somehow Robin convinced his honey, Wendy – a woman whose radiant beauty is only magnified by her seeming lack of concern for the appearance of her partner – that he was the man for her.  Wendy, your low standards give marginally attractive men all over the world hope.  We thank you for that.   And we thank you both for Diego Efrain.

Also, we’d like to note that Efrain was born just about the same day as the last issue of our magazine, and in some grand harmonic convergence fueled by Ilegal Mezcal we’ve decided that the life of this adorable little pup and our warped publication are forever linked in their fortunes.    Though, when I tried to convince Robin that “Lacuadro” was a beautiful name for a young boy, he threatened to cut me off for the night.  That simply would not do.

Now, you might think that intimating a spiritual connection between the fate of a beautiful baby and our rag is a pretty horrible thing to do, and you’re right.  In this relationship, clearly we’re the anchor and he’s the sail.  But we’ve been selfish bastards for a long time and we probably can’t succeed on our own, so we thank Diego Efrain in advance for all of the good luck he’ll be bringing us over the years.

We would also like to thank this month’s contributors, artists and advertisers.   Limited space prevented us from including all the submissions we’ve received – but please keep them coming by sending them to:  lacuadramagazine@gmail.com.

To keep matters simple we’ve decided to hire little Diego Efrain as our stories editor.  He generally indicates which ideas he prefers by profusely drooling on certain submissions, while wadding up others into balls and throwing them into the corner.   He started working this month, so if you have any complaints about the content of this issue, you’ll have to take it up with him.