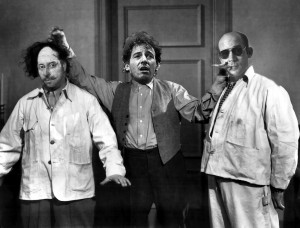 In Shakespeare’s greatest historical play, Henry V, these lines are written for the young king on the ultimate day of the Siege of Harfleur in 1415: “Once more unto the breach, dear friends, once more, or close the wall up with our English dead!”

They have fought, they have died. There has been suffering and great loss. Henry’s army is withering under both the arrows from above and dysentery, the so-called bloody flux, from below. But now, as the gates of the town are being forced open, the King rallies his troops for one grand charge that might win the day.

Once more into the breach, dear friends, once more.

Suffering the Guatemalan version of the bloody flux or not, with the beginning of each year, we think upon the words of King Henry and reflect that life is, in one of its mightiest aspects, a battle. Living in this world requires a warrior’s spirit and a tolerance for increasing loss and accelerating death that culminates, at long last, with our own.

We’re far more about the metaphorical battles of self than the territorial ones of state, but we believe King Henry’s words transcend into the spiritual realm. We are here to do great things, we believe the greatest of those things must be done together, and to do so we must push past our limitations of fear and the urge toward flight. We must fight to become who we are meant to become. And so, we say unto you, our readers and our friends, Once more unto the breach! Once more!

Now, if Shakespeare’s were the only words called upon at the beginning of the year, then we might be able to pass ourselves off as men of noble thought, even if low-born. But alas and alack, Shakespeare has stranger company in the folded madhouse of our brains. In our late night, mezcal-soaked musings, the Author of Avon is attended by a coterie of oddballs, led in columns by a rotating set of generals. This year they are Hunter S. Thompson and Bruce Springsteen.

All in all, it’s an odd mix of writers, magicians, poets and troubadours who jumble our thoughts of both beginnings and endings. It is a regular Bulgakovian feast! Legions of literary loons flood into our dreams in January, making mischief and reminding us of the cold temporality of our time on this mossy rock.

Just last night, one of us dreamt that The Boss was teaching The Bard how to strike a power chord while Hunter slipped an heroic dose of acid into the punchbowl, muttering madnesses to the wind, “Queen Mab no bigger than an agate stone, you say? Ha! Her chariot an empty hazelnut shell, you say? Double Ha! Two sips of this and you’ll be running from a hook-handed dragon with hemorrhoids, you Elizabethan dandy! Trip-li-cado Ha! Now where did I leave my geese?”

You see, even with the classics as guide, our 21st-Century brains are rather messy places. But still, there is an order to our thoughts.

It seems that, for all of Hunter S. Thompson’s antics, he also reminds us much of value as we begin another run around the sun. It was he who noted that “Life should not be a journey to the grave with the intention of arriving safely in a pretty and well preserved body, but rather to skid in broadside in a cloud of smoke, thoroughly used up, totally worn out, and loudly proclaiming ‘Wow! What a Ride!’”

It is Bruce Springsteen who sings a constant song, deep in the reptilian part of ourselves, noting how “At the end of every hard-working day, people find some reason to believe.”

Al final, we need them all. We need every gallant wordsmith and crackpot poet we’ve come by thus far in the journey to encourage us onward, so that we might encourage others onward. We need each and every member of our families, be they biological or booze-bonded. We need all the songs that have ever been sung at our home in Café No Sé, and every hopeful dreamer who has come through our adoptive hometown here in Guatemala.

There stands the breach before us. We, together, are our mutual reasons to believe, and we’ll be here to remind one another that it’s a far better thing to be a perfect fool than a pretty corpse.

So, with you all in our thoughts and our hearts, we invite you down for a round or two of booze, some great stories, some rousing tales of debauchery and some beautiful songs of truth, beauty and light. See you at the gates.

Letters to the Editor - CAFTA: A Step In the Right Direction for Guatemala

Letters to the Editor - Our Readers Respond

A Response from Anacafe – The Coffee Trade
By Guatemalan National Coffee Association
Thursday, May 14th, 2009

Letters to the Editor - Letter From the Editors – November / December 2011