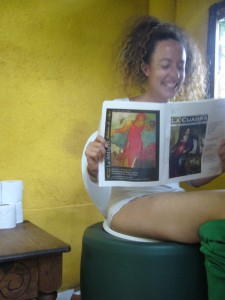 What a Summer! Nuclear threats from the infamous North Korean dictator with the world’s funniest head of hair, Kim Don King. Revolutionary hot chicks on the streets of Tehran twittering themselves into the pages of history! Political murder and public demonstrations in Guatemala City! A semi-dressed, cowboy hat wearing President in Honduras being whisked off to Costa Rica in his jammies and making a semi-triumphant return to Tegucigalpa with the backing of presidents of both Venezuela AND the United States! Sarah Palin quitting her job because a late night funny man made a dirty joke about her slutty daughter! The whole world just seems to be coming apart at its irrational seams, and we couldn’t be happier.

It’s hard to take in this much bizarre news.  Really, if these event are just the teaser roll for what awaits us in 2012, we are thrilled that we have such good seats for the end of the world. We say, “Bring on the C.H.U.D.S. and the Zombies! May the dead rise from their graves and give us all a big belly laugh as the universe pitches further off its axis!” This is going to be fun. What’s next? Who knows, but we are heartily rooting for a Michele Obama / Michael J. Fox sex scandal – with hand held shaky-cam for that Reality TV, cinéma-vérité feel, or maybe an honest to God golpe estado here in Guatemala, conducted by members of the ultra-secretive Payaso Puro faction in the military. (Don’t worry, their guns only fire flowers and they’re easy to spot – just watch out for the giant orange boots and the big rubber noses.)

And as we face this wave of cresting insanity of our world, La Cuadra feels we can finally and officially announce our arrival on the world stage,  just in time to mock the final collapse into madness and absurdity that seems to be engulfing our fair blue planet.

We feel this for two reasons:

First, even as you read these words, they are being beamed around the world via the interwebs. Yes, www.lacaudraonline.com is finally up and running. Now all your friends back home can find out what the fuss is about by going online and accessing our fully archived and brilliantly presented webpage. We’re trying to figure out how to get La Cuadra to show up when someone types tranny crack whore into google. No success, yet.

Second, on a recent trip to Earth Lodge we discovered that La Cuadra had made it to the top of the magazine pile in their world famous outhouse! Yes! Forget all the Pulitzers we’ve won (zero), forget all the critical praise we’ve received in the pages of the New York Times (none), forget even the viral buzz we’ve created with our gorgeous on line presence (minimal).

We are now the choice reading material in Bri and Drew’s long drop toilet! That, friends, is what we’ve been aiming for all these years (see  photo above). Though, strangely, when we made this discovery we noticed that several pages were inexplicably torn out. But in a world of such waxing insanity, we didn’t bother trying to figure out what that meant. We’re assuming someone must have really liked our wit. In fact, we’re pretty sure we heard a guest saying something to that effect later that evening. It was whispered across the room in a hushed voice, but it sounded like, “Those guys who make La Cuadra are totally full of wit. “

And so, we invite all our readers to take a deep breath and enjoy yet another installation of “our wit.”

Letters From The Editors - Letter From the Editors July August 2009