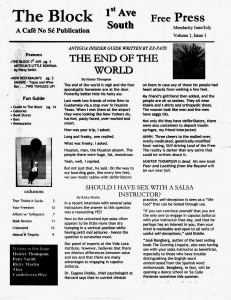 My first thought for this Letter From the Editors was go gather the five contributors to La Cuadra who have written the most for us over the years and take a group picture of them all holding up their middle fingers.

The headline was going to be: “Yayyyy! We’re This Many!”

But Anne Seymour is in Zambia and out in the bush. Kevin Petrie is out of rehab, but back in Seattle. Joe Bageant is on the wrong side of the grass. And Hannah Wallace Bowman is too busy to be bothered with us lunkheads most of the time, though we don’t hold that against her at all. It shows good judgment.

So that just left the two of us (lovingly, and with a sense of anti-establishment solidarity) to flip the bird to the world. Yet, even using both hands we’d still be one finger short because La Cuadra is now officially five years old! To the right, is a reproduction of the first page of Volume I, Issue One from June / July of 2006.

At that time, La Cuadra (or, The Block, as it was known for its first two issues) was 16 pages of smartassedness, published on newsprint and almost entirely satirical or scatological in content. And though we’ve grown into a full-on glossy, we’re proud of our editorial consistency over the years.

The idea to put out an English language magazine (that spoke more to our mindset than the other excellent publication in this burgh) arose después muchos mezcales at ass-o’clock in the morning, nearly 7 years ago. For both the image and the record: the conversation took place at an early-opening bar just past dawn in the market.

One of us was wearing a full-length black dress.

Aside from being drunk, we were frustrated trying to get well-written English language periodicals in Guatemala. And then, the more we drank about it, the more we realized that most of the magazines we’d once liked up north had gone all flabby around the editorial board, anyway. So one of us raised a glass to the other and with all due sincerity said, “Fuck it! Let’s make this baby!”

The bartender, noting the dress, and knowing just enough English to be concerned, made his way to the far end of the bar.

But, at the time we were also busy with other projects, including taking care of our hangovers the following afternoon, trying to design ever-smarter ways of bringing booze across the border from Mexico and how one might drive business to the then hinterlands of 1st Avenue in Antigua.

So, the idea would fall through the cracks until we’d get drunk enough again to swear we were gonna “get that damned thing done tomorrow.”

Nothing happened until the summer of 2006 when your current Editor-in-Chief was half-way around the world — literally half-way around — in Darjeeling, India. With his bad influence removed, the copublisher and founder of La Cuadra finally pushed this baby out into the world. God bless his black, little heart.

Loads of things have changed in our lives over those years, as we’re sure they have for you, too. But where we’re extra fortunate is that we’ve had a forum to chronicle all that jazz in these pages. All the deaths, the loves, the passions, the arrests, the paroles and the stories that seem to grow in this odd little town like nuclear-radiated mutant raspberries, have made up much of this rag’s content. Just as it’s good to have a local bar — a metaphorical campfire if you will — to which one can retire at the end of the day and share what’s on your mind with friends, having this outlet has been great for our stress levels and our overall mental health. And we can’t tell you how good it feels to have loyal readers who actually give a damn about all of our ramblings.

But we can, humbly, say thanks.

One never has any idea, really, how the world is going to progress from a starting point. Some of the longest and best relationships in our lives have begun with the most awkward of mornings. And some of the best ideas we’ve ever had have come crashing down around us like so many paternity suits (it’s metaphorical, moms, don’t worry) from ideas we found auspicious only hours before. That’s all part of the game. New shit can wildly succeed or it can completely suck. You never really know.

But, every once in a while it just makes sense to abandon ship, dive into the darkness and swim in the direction of some imagined shore. One arm pulling against the current, one finger raised in salute to this beautiful, horribly confused world.

We couldn’t have done it without help from a league of friends and contributors and editors whom we love and thank very, very, very much . . . and we hope you’ll help us stick around for at least a few more years.

Letters From The Editors - Letter From the Editor – October / November 2009

Letters From The Editors - Letter From the Editors – September / October 2011

The Masters Of Disaster
By Michael Tallon
Wednesday, October 5th, 2011