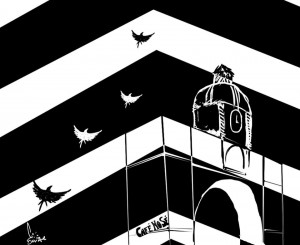 When one of us was a little boy, only about five years old, we hatched a plan with our brother to learn how to fly. We knew that it was possible to rise above the ground, all we had to do was grab one another by the scruff of the neck and lift. One would lift the other, and, though we didn’t have the words for it back then, we could create a self-reflective feedback loop and, with each carrying the other, we could soar. In practice, it didn’t work, but the theory, we still believe, is sound. It was the beginning of what would come to be our holistic view of the universe.

“Hi! We’re holists!” might seem a rather awkward, but ultimately honest, way to introduce ourselves to readers. Awkward, because most of our friends would cuff us in the back of the head and say, “Well, you got the ‘hole’ part right, anyway, you idiots.” Honest, because we agree with the Aristotelian axiom that the universe (the whole Megillah, if you would), can be conceived in terms of unnumbered, self-regulating and perpetually interacting systems, each representing smaller wholes in and of themselves. We believe that the interactions between those myriad self-regulating mechanical, chemical and physical systems ultimately gave rise to a self-transcending system called life. Further, we assert that the fundamental truth of this here cosmic rodeo — the quintessence of it all — is that, as life emerges from the physical systems of the universe, so beauty emerged from life.

We hold to be incontrovertible the notion that our big-boy job on this planet is the creation and apprehension of beauty — the metaphorical child of life, the figurative grandchild of the stones and the stars. We believe that when we silly, human jumping beans do our job right, the forces of the universe will ultimately align and ease the path forward and upward. It appears that such forces are conspiring in Antigua, and we’re looking forward to the ride.

Nearly a decade ago, when we first sat down over a bottle of mezcal and started to hatch a plan for this magazine, our primary target was something different than merely selling advertising space and making a living. Which is good, as if that were the goal, we would have missed by a staggered, wandering mile. What we wanted from this magazine, and from our sister businesses, Café No Sé and Dyslexia Books (now Dyslexia Books Publishing, thank you very much!)  was to help engender a movement of the arts. We wanted to provide a gathering place for artists, writers, poets, musicians, crackpots and wanderers to come make some noise with one another. We wanted to provide a catalyst (or a refilled shot glass) that would remind ourselves life is not about branding, marketing, parceling and selling stuff. Doing so is certainly important for putting food on the table and a roof over the head, but it’s not the point of existence and at times in our own lives, we’d forgotten that. We make this rag to remember that art is the point. Stories are the point. Music is the point. Truth, beauty and light are the point. Sharing love and time together is the point. Allowing the reflexive cross-pollination of creative minds to gather together is the point if you want to see something beautiful grow and flower and blossom.

Or, as one of us said to the other not a week ago, “If you put your own bullshit in one place long enough, something is bound to grow.”

Something is growing here in Antigua. If you’re just passing through town, you would be forgiven for assuming that the city has always been this alive. But what is happening creatively in 2014 is something new. In the past few months we’ve seen artists’ collectives forming (one of which, Colectivo de Artistas Contemporáneos de Antigua (C.A.C.A.), is being featured in this issue of La Cuadra.) Films are being made (we wish you luck and we love your work, Nick, Meghan and Axel — and Lex, you look fabulous in your upcoming role!). Books of poetry are being published (swing on by Dyslexia or navigate your way over to Amazon.com to find a new title, Little Stories by Antigua Poet Laureate Michael Chrisman, or the new CD/eBook release of the Nelson Lunding produced gem, Serpent’s Nest). Area chefs are moving beyond themselves into new worlds of exploration (way to go, Neil, Nils, Noé, Alex and Mario!), and a few amazing pubs have recently opened to serve the vital needs of a thriving, striving community (we’re lookin’ at you fellas and ladies over to The Snug and our new neighbors Hops and Tales! Cheers and all the best!). Also, great-big ups to the folks with the killer BBQ who made Antigua very happy. Nice. Damn. Job.

Antigua is rising. We aren’t taking credit for it, but we’re damn glad that this burgh has allowed La Cuadra, Dyslexia and Café No Sé to be a part of some really special times. Let’s keep it up. Support your local artists! Keep dreaming of making our town and the world a more beautiful place! Keep grabbing the scruff of your brother’s neck and lifting. Together, we fly.

Letters From The Editors - The Passing of Peter Kilbryde