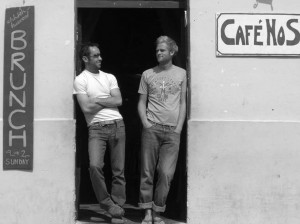 Sure, we hoped La Cuadra would be a success… but we must admit we were a bit taken aback when high powered Hollywood producers started expressing an interest in our story.  But, some men are born to greatness while others have it thrust upon them.  We will do our best to live up to our public’s demands.

“La Cuadra – Origins” begins filming on location, in Antigua, later this month.  The bloke on the left, a young and upcoming Australian heart-throb, will be playing “The Bossman,” impassioned and unconquerable dipsomaniac from New York City who’d seen enough of corporate life and struck out to define his own vision, always knowing that one day he would return.  The tall gentleman on the right will be playing “The Bossman’s” partner, “Big Livered Mike” – the roguishly handsome but tragically flawed poet with a weakness for tequila and hot German girls.

Together, and with a crew of roustabouts, tramps, dreamers, schemers and sages who make Antigua and Café No Sé their home, they hatch a plan to reintroduce the world to the virtues of guerrilla journalism, burlesque shows, great booze and the power of a well raised middle finger.

It’s a buddy movie with an wry and satyrical bent and according to some insiders, it is favored to take the Golden Palm at Cannes in 2008 – though doing so will likely involve contracting the services of Earl – our safe cracking friend.  (To read more about Earl, check out the interview with music legend, Willie Murphy on p. 33)

Stay tuned for further updates about filming, and if you’re interested in being an extra in the movie, then drop on by Café No Sé and we’ll have a chat.  Priority will be given to girls with great curves, low morals and drinking problems – or to guys with eye patches and valuable skills learned aboard pirate ships.

And if you believe any of this crap, we’d like to introduce you to our advertisers, because it seems that you will buy anything.

While signing away any movie rights may still be a pipe dream, La Cuadra is definitely moving forward.  Just feel the slick new paper between your fingers and marvel at how much better the ads look!  Then, RIGHT NOW! turn IMMEDIATELY! to the center section of the magazine to find our removable Map and Guide to the Other Side of Antigua, The Insider.

There are a hell of a lot of bars, restaurants, night clubs and cultural events going on in our little 10 x 10 city, but it takes an Insider to really know where to go – and if you dig this magazine and you trust our voice, we think you’ll find our recommendations for celebrating the town right on the money.  Who knows, if you dig it enough, we might even recruit you into this army of fools.

Then again, if guerrilla journalism, great booze, curvy women, pirates or well raised middle fingers aren’t your thing, we’ll still be glad to wave to you as you pass on by.  Movie deal or not, we’ve got the life down here.