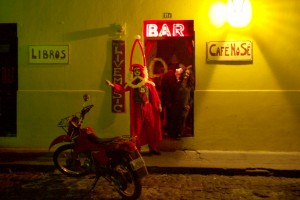 Merry Something-or-Other and a Happy God-Knows – What from the editors, publishers, writers, artists, alcoholics and enablers of La Cuadra. You might not be in the holiday spirit just yet, but as our next issue won’t be hitting the streets until early January, we figured we’d “Kringle it Up” with this edition.

Of course, we’re doing that in our own inimitable style – with a surfeit of uplifting stories on subjects such as Cyanide Poisoning in the Western Highlands of Guatemala, an Attempted Right Wing Coup in Bolivia, and the Coming Complete and Total Collapse of the Global Economy! And if those gems don’t get your Ho-Ho’er, Ho-Ho’ing, then we’ve also got a few stocking stuffers on bank robbery, drug abuse, thievery, improper disposal of a body and abortion. Which, of course, begs the Christmas question: What the hell is wrong with us?

A complete and truthful answer would take up far more space than is allowed – and would likely land us in jail. So, let’s just blame it on booze and a case of intra-cranial black mold brought about by an exceedingly long rainy season.

But all is not bleak by any means. As we write, the sun is shining brightly, blithe and beautiful travelers are skipping along the cobblestones, intoxicated by the views, the colors and the magic of Antigua.

And most happily, Barack Hussein Obama is the President Elect of the United States, allowing the entire planet to feel the almost indescribable relief of finally having passed a melon-sized kidney stone. Bringing almost as much joy, the Pitbull in Lipstick (Bless Her Heart) has been shipped back up north to shiver, wait for the Rapture and wonder why God didn’t reward her with the Vice Presidency? (Hey Sarah, want a hint? It’s because you’re an asshole and God is not.)

To those happy results La Cuadra sings a glorious Hal-le-fuckin’-lelujah!

On the local good news front, El Colectivo Garifuna & Umalali will be performing a concert in Antigua on November 22. For those of you who do not know this amazing Belizean group, they won the World Music Expo Award in 2007, the BBC World Music Award in 2008, and their album, Watina, was acclaimed one of the best world music releases in the past decade.

The concert, being put on by our great friends at Planeta en Ritmo, is a tribute to Andy Palacio, former Colectivo frontman, who died earlier this year. In keeping with Andy’s demand that success should always support local traditions and cultures, the concert will raise funds for Niños de Guatemala, a local NGO that is opening a school in Ciudad Vieja in January.

It’s going to be one hell of a party. Bring your dancing feet and your drinking shoes. Tickets are going fast. Get yours at Café No Sé, Y Tu Piña También, Reilly’s Irish Tavern, El Pelicano Dorado, Mono Loco, Chill Out, La Sala or Kafka.

Our resolutions for 2009 will include letting the light shine a bit more brightly through our surly windows – but for those of you have come to count on us for a bi-monthly, bi-polar dose of madness, worry not, we’ll still find something to snarl about. So, Happy Holidaze and we’ll see you soon at Café No Sé.

Finally (and seriously) we’d like to extend love, support and prayers to our friends in San Pedro la Laguna who recently lost a loved member of their own orphans’ family. Our thoughts are with you and our bottles are raised.

Letters From The Editors - Letter From the Editors – Do We Matter?