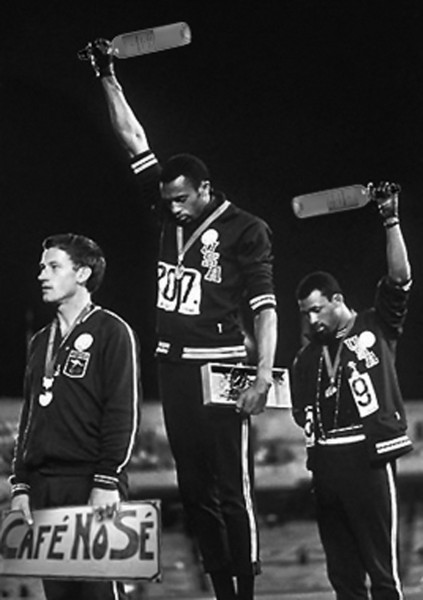 Back in late 2001, one of us asked the old man if it was the worst year he’d ever lived through. Without hesitating he shook his head and said, “Not even close to ’68.”

He made the point that while 2001 had been hard, it couldn’t hold a candle to the sheer madness of twelve months that began with the Tet Offensive in January, stumbled on to the assassination of Dr. King in April, and then only six weeks later Robert Kennedy in June. By the Fall cities across the country had seen rioting, looting and widespread arson, and in October the Chicago police took a firm stand against justice and freedom of speech behind billy clubs, riot shields and clouds of teargas right outside the site of the Democratic National Convention. And if that wasn’t enough, in November, Richard Nixon was elected 37th President of a United States of America that barely merited the name.

But there is another way to look at it. 1968 — not just in the United States, but in much of the world — had something that 2001 (and all the years since) just didn’t. In both years there was war and the myriad pandaemons that spring, enraged, from its head. In both years there was jingoism and there were true believers who saw nothing beyond their own limited dogmas. There was intolerance of dissent and suppression of dissenters. In both times, there was mindless bigotry. In 1968 as in 2001 there were undercurrents of fear racing through the streets and demagogues aplenty in both times to wield that insecurity as a cudgel.

Sure, there were those of us who resisted the insanity in the salad days of this millennium, but we weren’t a resistance. We didn’t have the necessary coefficient of political friction to be more than an entertaining sideshow in the mad circus of a lurching empire.

We shouted and were ignored. And that we were right on virtually every count, doesn’t do much to salve the tragedy of so many lives lost, so much power and wealth distributed upwards, so many families brought to economic ruin. Hell, in many ways that feeling of political and economic irrelevancy is what drove us to sneak out of camp one night and disappear over the southern border, pausing for just a moment at dawn to look back as the caravan zombied towards the ringing of the next Taco Bell, the dim light of the Starbucks just over the horizon.

But now we’re getting to wonder if there’s a dance in the old dame, yet.

We came down this way to live, work, create, bird-dog and booze-hound with abandon. But also with the background hope of producing some things of value that we could reinject back into the world we’d left behind. One is the spirit of Café No Sé, and after eight years of hearing people tell us that we’re the bar they’ve been searching for, the one that’s the right mix of spiritual anarchy, intellectual stimulation and physical debauchery, that we think we’ve done a pretty good job. Another is Ilegal Mezcal. Everything about our mezcal speaks to the spirit we thought was lost for good up north. It’s a damn-near holy drink. The agave is grown and harvested by real, individual, independent farmers. It’s produced, distilled and aged by a real, independent mezcalero, and it’s consumed by real and thoughtful drinkers. We’ve made this business as much with our wits and our balls as anything else, and now it’s hitting big back at home. There’s something inspirational about that. Maybe it will become the booze of the new resistance. The Ilegal 99!

Because, clearly, we were wrong about our old stomping grounds. Even if it slid right past our generation, them kids out at Occupy Wall Street, Occupy Oakland and Occupy Every Damn Place In Between seem to get it in the old 1968 kind of way, and with this issue of La Cuadra, we want to share a spirit of solidarity with our brothers and sisters on the line. So we’ve put together this mag with an eye towards honoring the élan of rebellion, resistance and intolerance for fools who rule us by dint of their power, not their honor.

In these pages there’s a story about a girl who, years back, launched a revolution in a classroom and in the process found something golden in her soul. There’s an analysis of politics in Guatemala (something we’ve avoided until now, but what the hell — somebody’s gotta tell the gringos what’s going on.) There’s a rumination on the need to resist dominant paradigms in development work, a story of some very resistant sea-turtles and a bit of wisdom from James Stephens in his poem, What Thomas An Buiel Said In A Pub. We’re proud of this one.

So, we’ll see you in the bar and at the barricades. Fist raised and smiling.

Letters to the Editor - CAFTA: A Step In the Right Direction for Guatemala

Letters to the Editor - Letter From The Editors – January / February 2014

Letters to the Editor - Our Readers Respond

A Response from Anacafe – The Coffee Trade
By Guatemalan National Coffee Association
Thursday, May 14th, 2009