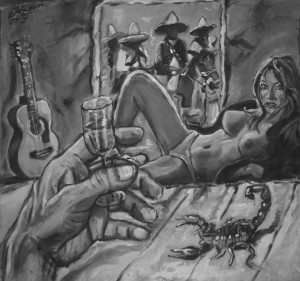 It’s a letter to you because I remember those first few weeks in Antigua – exactly four years ago this month – and  I remember that taunting, echoing thought to make sudden changes to my travel plans and decide to stick around for a while. And I remember the other dense and deeper thought – to bag it all, to tell the boss to pound sand and to take the leap: to ex-patriate.

And I remember the moment when I finally decided to do it.

John and I were on a run up to Oaxaca to steward a few thousand liters of Ilegal Mezcal across the border, back to Antigua and into the safety of Café No Sé. We’d been on the road a few days and we were on our way home. It was 8:45 on a Tuesday night. We were half an hour north of the Guatemalan – Mexican border at Tapachula in the bed of a pick- up truck being driven by a deeply crazy mezcalera on a dark, dirt road, flying hell bent for leather at about 80 miles and hour surrounded by glass.

Orion was due south, with a full moon above. We’d been loading and unloading cases of mezcal in the heat throughout the day – but the night had a chill, so we’d cracked a bottle and were trying to fend off the wind with a few ratty old coffee bags.

As our driver skidded around a corner the bottles rattled across the floor. I turned to John and said, “We’re both in our 40s. We both had successful careers in New York City. We’re both pretty smart guys…”

The tires skittered as the driver swerved sharply to avoid a hallucinatory fever dream and clipped the ruts on the side of the road. We bounced – the bottles, the crates, the driver, and us – a few inches in the air then crashed back down hard as the truck accelerated once again.

John passed me the bottle and finished the thought.

“And now we’re barreling down a dirt road in Mexico, heading for the border and hoping to hell we make it home alive”

“Yup.” I said. “Feels like I’ve finally done something right with my life.”

And that was that. Four years in and the trip is still a blast. So, to you, the one who is wandering and wondering if its really necessary to go home I offer the unsolicited advice – give it a shot, there’s room in the pick-up and the moon is still high. Jump in.

The fight is today. The fight is eternal.
By Michael Tallon
Wednesday, December 21st, 2016

Letters From The Editors - Letter From the Editors – January / February 2008