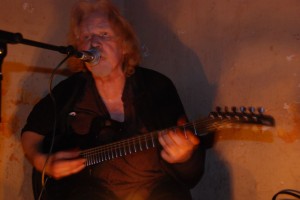 Sometimes it’s good to know an ex-safecracker and felon and even better if he is a friend.  My ex-safecracker and felon friend is Earl. He looks like a cross between Charles Bronson, Clint Eastwood and Sam Elliot, but with mica blue eyes and the wrinkles of a Shar-Pei. His moniker is WUOF- wrinkled up old fuck. With his looks and deep smoker’s delivery he could easily have played a Hollywood tough guy. Instead, he was one in real life. He’s now somewhat reformed, though I hope someday to bring him out of retirement for one last job. God knows I could use the bread.

Back last November I ran into Earl up in Oaxaca. We went off to one of our favorite bars and over mezcal and beer got to talking music. “Earl,” I said, “one of my dreams is to have Buddy Guy or Johnny Winter play in my café in Antigua.”

He gave me a grin and then said, “How ’bout Willie Murphy?” He then slipped a CD from his jacket, gave it to the bartender and asked him to play it. I took a sip on my beer and then some amazing boogie-woogie piano bounced from the speakers accompanied by a voice that sounded somewhere between Dr. John and Leon Russell.

“Is that Willie Murphy from Willie and the Bees?” I said.

“Yeah, you’ve heard of him?

“Years ago.  He’s incredible, he still around?”

“You want him to play at your joint in Antigua?”

Earl polished off a shot. “We’re old friends, from the same town. I’m pretty sure I can get him to come down.”

Five months later Willie showed up in Antigua.  And with a lot of help from the good folks at GALLO BEER, the thoroughly insane and ever-resourceful Tono Pullin and a slew of lunatic friends who lent us equipment, Willie played a concert in Café No Sé that blew the lamina off the roof. It was a night of old school Rock’n’Roll, Boogie-Woogie and Blues that will long be remembered. The mezcal flowed, everyone danced, wrong and right people were kissed, fondled and . . .

Amongst Willie’s side men were Antigua’s all-stars Willie Gomez on the guitar and Hector Castro on the bass.  The opening band was fronted by Blues slide guitar virtuoso and vocalist Pauli Benoist and Syd Kilgus- Vesely on the harmonica and vocals.  Damn they’ve got it.  Pauli’s got a little Hound Dog Taylor and Duane in him. And Syd – well the girl’s got a direct line to some bayou voodoo shit . . .

But back to Willie Murphy– for those of you who never heard of him the short bio is this: He’s appeared with all the greats, Muddy Waters, Dr. John, Bonnie Raitt, Wilson Pickett, James Brown, John Lee Hooker, The Neville Brothers, Etta James, Eric Clapton, Joe Cocker, Jefferson Airplane, Joan Baez, James Taylor, Taj Mahal  and on and on. Perhaps his biggest claim to fame is that he has snubbed fame. He’s a musician’s musician-Willie, Prince and Bob Dylan are the three charter members of the Minnesota Music Hall of Fame.

In the week that he was here I spent a good deal of time with him and Earl my safecracker friend. One of my most favorite and ironic moments was having lunch with the two of them at Panza Verde where they told stories of being in jail. There’s nothing like eating Magaret  du canard l’ Orange and roasted beet salad with goat cheese while being regaled with stories of stick-ups, jail breaks and solitary confinement. At one point Willie asked Earl, “Why were you in the pen?” Earl responded, “Mostly for breaking out.” At another point Willie said, “Back around 67′ or so I was arrested 32 times in one summer. I think it’s kind of a record.”

As the days passed and I got to know Willie better, I began to see that he was not only a brilliant and passionate musician, but that he is a man with two personas: one the larger than life performer-rock-star; and the other a private, reflective, deeply political man who has lived by and clung to a set of Beat Generation values while most of the world around him is increasingly sanitized, commoditized, monetized, supersized and lobotomized. Willie never sold himself out; and it comes through in the love and passion for the music, the conviction in his conversation, and in his complete disdain for authority.

On our walk back from Panza Verde on that same afternoon we passed by the 300 year old ruin Iglesia San Jose Viejo. It was empty save for a few gun-toting guards standing about. It was being set up for a jazz concert. At the far end of the space was a baby grand piano covered by a burgundy red fabric. Willie glanced at the guards and then moved toward the piano quickly. He pulled back the fabric, lifted the cover and set wailing on the keys and singing. If my memory serves me well he was pounding out GOOD GOLLY MISS MOLLY.  The guards rushed to the piano but Willie kept playing and singing, not long, but long enough. It was a little act of defiance and joy.

In this day and age neither is really good without the other; and more of both are surely needed. Willie came around to remind us of this, and in the process gave us the show of the year.

Below is an interview with Willie conducted by Wendy Wever former publisher of the Austin Texas music magazine, Austin Daze.     John Rexer

WW: How did you get started in the music business and when did you know this was going to be your path?

WM: I sang in a children’s choir at the age of three. I started playing piano when I was four; my mother taught me. My mother was pretty much a non-conformist, a word I learned early on. Then, when I got to the third grade, we moved to a different school where we had nuns. I took piano lesson from the nuns.

Then, when I was in about 5th grade, I went to a Catholic school, which was in a black community. All of a sudden I was exposed to music everywhere.  I had already listened to early Fats Domino on the radio in Minneapolis, Minnesota. We also had a Little Richard fan club, with jackets and everything. I started buying records, 45s, of Little Richard and Fats Domino, and the doo-wop groups of course. I was totally infatuated with that music.  This was in the 1950’s,

I started playing the piano like Domino instead of playing Chopin tunes. Then Jerry Lee Lewis came along and his stuff was really easy. I said, “Wow I can do that song with the left hand.” So I was playing all that stuff.

My mother was always going to rummage sales, and one day she brought me home a saxophone. I taught myself how to play it. Then I taught myself the trumpet and the guitar. I got a book and practiced. Then I started playing in some little rock and pseudo jazz bands. We would all be sitting on the corner banging on acoustic guitars and singing.

WW: That’s great, at what point did it click that you decided that that is what you were going to be doing.

WM: When I was 18 I played for the first time in a bar for money. I decided that if I could do this for a living I am not going to punch a time clock. So that is what I did.  I was a beatnik. You become who you are and you become what you want to be.  I wanted to be a beatnik and a musician and that’s what it comes out to be.

But really it was the power of music. I can remember being at home and listening to Little Richard on a 45. Listening to it over and over again, asking myself, “What are they doing, where’s that power coming from?”  I still believe to this day that Little Richard’s recordings are some of the greatest rock n’ roll records ever made.  I believe to this day that he’s the greatest singer.

WW: You are in the band, the Angel Headed Hipsters, tell us how they came together?

WM:  Well it’s called the Angel Headed Hipsters Burning for the Ancient Heavenly Connection with the Starry Dynamo in the Machinery of Night.  It’s the forth line of Allen Ginsberg’s great Poem, Howl. That name came about when I started a new band, in a post modern kind of fashion; we decided to have a different name every gig. Well, in Minneapolis all the club owners hated that so we sort of just stopped with the name we had that week, which happened to be from Ginsberg’s The Howl.  We sometimes still do that. We have a band name called the Mutha Fuckas.

Demo from an as yet Unnamed Upcoming Album
By Matthew Grimm
Thursday, April 26th, 2012