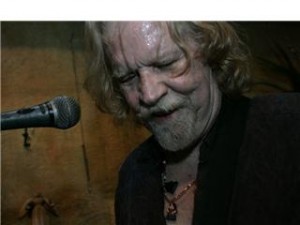 We got together because I played in a bunch of rock n’ roll bands in Minneapolis.  Rhythm & Blues, all black bands generally. Then I ran into a guy named Spider John Koerner.  He and two other guys, Dave Ray and Tony Glover had established quite a name in the Folk world by recording for Jack Holzman’s label, Elektra Records.

Dylan had come out and everybody was rediscovering the old blues guys. All these folkies were running around with guitars. I remember Dave Van Ronk had a band called the Hudson Dusters. Arlo Guthrie had a band. All of a sudden Spider John Koerner wanted to start a band.  We started touring together mainly through his folk contacts. We played our stuff for Elektra Records and they loved it.

We recorded in the studio that they had started in the mountains of California.  Our group was called Baby Browning, which was a bunch of different folk singers – Jackson Brown, Ralph Kemp and I. Then I was in this other band, with Dave Ray and Koerner. We toured through the whole 60s.  I think we didn’t actually cut the record for Elektra till 69. They loved it.  Jack Holzman still swears this is his all-time favorite record. Today it has a certain cult status to it.

But we didn’t pick up the option for the next record. Koerner said he wanted to make films and I wanted to go back and make a big R & B band. And that’s what we did. Elektra was merging with Warner Bros. and Atlantic when Jack Holzman offered me a house producer job.  In the mean time I had started my big R & B band, Willie & the Bees. I ultimately called him back and said,” No I am not going to do it. I turned down a producer job and Willie & the Bees became rather legendary.  That band lasted for sixteen years. It was political. It was dance, very jazzy, a lot of horns and a lot of harmony so everybody could sing along.

WW:  Tell us about your writing process.

WM:  It’s always different.  Yeah, sometimes a line pops into your head and you like it and you turn it into a song.  Sometimes I often have a concept, I write it down and I say, “I want it to be this, I want it to be that.” Then you just let it gel. The lines will come up.  That’s a good way to do collaboration.  We had one that was a very successful collaborative song called Supermarket in about 82 with a big band. We could not play a gig without playing that song twice.  It was a big dancey disco political thing, as life as a supermarket. The whole world is a supermarket.

I think one of the important things about writing to me is to know when not to turn an idea into a song. Most of my ideas are political.  For about 2 years I didn’t write anything but post modern theory. Long before anybody knew what the word globalization was. I was really into that stuff. My opinion is that the older I get the harder it gets to find anything that I think is worth writing about. It’s all been done. I remember in the 70’s the so called punk and new wave thing happened, everyone started writing songs about houses, shopping and stuff. That’s good. I tend to think that’s great because I don’t think you’re not really making art if you’re not overtly political. Everybody’s political. For years I would see my friend Bonnie Raitt, whenever she came thru town. I had produced her first album.  I would play with her and play her some songs and she would say, “Hey, I really love that but I couldn’t do that, it’s too political.”

WW:  That’s what’s so great about being able to meet the masses thru music

WM:  The best thing you can do is introduce an idea to somebody’s mind. But I really don’t think music changes things that much.   In the post modern area it became apparent that things were all fucked up in the world, but what could you do about it? That’s the big question even now. We’re all stuck and inundated in the system. I think one thing you can do is talk about it. Educate. Not everyone knows what’s going on. We’re an elite capitalism and everything is a commodity. It’s like the guy said, “You can’t be neutral in a moving train.” You’re political. The first thing is to be aware of that. The next thing is you can start to live your life in a way that might counter some of the evil being done in your name. I think it’s a myth that music can change the world. If that were true than the world wouldn’t be as bad as it is. But what it does do – and one of my great missions in life- is make people dance. You can make people feel good for a while. And dancing is a great way to do it. You get away from the mental and it’s the physical and the spiritual uniting with your soul. So that’s always been one of my great missions in life.

WW:  What’s your secret to longevity in the music industry?

WM: Spirit and I think luck. Also, what the fuck else would I do? I couldn’t get a job to save my ass.  I’ve always maintained that I couldn’t because of my political beliefs, and maybe because I am lazy, too. But I have always maintained an underground position, with always the potential of having a hit record. Like I said, back in the Bees we would have labels come in and I would just ignore them. So I was arrogant because I don’t like that. So for me I like maintaining a different outlook. When I was talking to my friend Michael Bland, who is Prince’s drummer, someone mentioned Paris.  I said, “Isn’t Paris a gas?” and Michael said, “Yeah, I played there.” And I said, “Did you go out to the great gypsy bars?” and he responded, “Oh no, we just stayed in the hotel for one night and we had to go to the next town.” That’s how they travel. In my world it’s not like that. I make friends, I hangout. I go to Italy often. I have a whole community. I play all over Europe that way.

WW: What brought you to Guatemala?

WM:  The same thing as the usual. I met a friend who knew somebody who wanted me to play and now John and I have become really good friends. I will probably be back here.  I love Café No Sé and the magazine, La Cuadra, is great. I hope it’s come through how much I appreciate John and everything he has done. I’ll be back.Find Willie’s Music at  www.cdbaby.com or check out his website: www.williemurphy.net