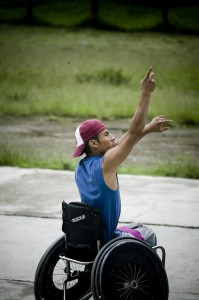 February 23, 2008. It was a typical Saturday night in San Juan Gascon.  Mum, dad and the kids were at home.  Luis, the eldest brother – a 19-year-old student – had gone out with friends.  At around 11:30, as the family was going to bed, they heard the spine-chilling screech of a vehicle losing control.

They feared the worst.  Luis had gone out on his motorcycle and was expected home any moment.  There was a notorious curve in the road near their house, and a drop-off to a river.  They raced out to see, praying they were wrong.   Tragically, as they approached the crash scene, they realized they weren’t.

And so began the longest night in this family’s life.  They took the unconscious Luis to the hospital in Antigua.  But they couldn’t do anything to help, so they transferred him to the National Hospital in the capital.  The bike had fallen on Luis’s back in the accident.  An MRI revealed that the impact of the collision had fractured his spine.  Luis would never walk again.

Luis spent the next three months in the National Hospital.  During that time, the most hopeful intervention was to perform an operation that might allow Luis to sit up on his own. The first operation was unsuccessful, requiring a second three weeks later. Luis developed bedsores in the hospital, which can be life-threatening and often take years to heal.

When Luis was discharged, he couldn’t be cared for in the family home, because, even if the family could afford a wheelchair, the house was not accessible to the disabled.  So Luis lived by himself in a room his family rented for him closer to the road.  Moreover, due to his disability, Luis had no way of traveling to his classes, so he had to drop out of school and give up his dream of graduating from university

It is fair to say that these were Luis’ darkest days.

June 13, 2009. It is a typical Friday afternoon in Antigua.  A group of guys are playing basketball on the court in La Candelaria.  They’re good.  So good, in fact, they’ve won second place in an international tournament the last two years, playing against teams from Central America, the Caribbean and Mexico.  One guy, in particular, stands out.  He only joined the team five months ago, and is already playing center.

The young man is 21 years old.  He’s gainfully employed, he’s in his final year of studying to be an accountant and he’s on a scholarship to study English.  His name is Luis.

Luis’ fortunes got brighter when, two weeks after he returned from the hospital, he was introduced to Transitions – an Antigua-based project which provides wheelchairs, prosthetics/orthotics, rehabilitation, employment, education, training and other support to disabled Guatemalans.  The project is led by Alex Gálvez, a paraplegic himself.

Alex, who had suffered from life-threatening bedsores from his own injury, provided support and helped Luis treat the wound at home.  Three months later, it was healed.  Luis was then able to begin a rehabilitation program with the Transitions team, which provided him with a wheelchair and taught him skills such as bathing, dressing and navigating Antigua on wheels.

Alex founded Transitions in 1996 after a life-transforming experience.  At the age of 16, Alex was the victim of a gun-shot wound that left him paralyzed from the waist down.  He was in a critical condition from bedsores in Hermano Pedro hospital when he met John Bell, a special education teacher from the United States who was volunteering at the hospital.  John arranged for Alex to travel to the United States for life-saving surgical treatment and rehabilitation.  This experience gave Alex a vision of providing the next generation of disabled Guatemalans the same opportunity that he had.  So, with the help of John, he returned to Guatemala and began the work of Transitions.

Laura Shearer comes to us from Melbourne, Australia. After studying Psychology at university, then deciding she didn't want to be a psychologist, she set off on the Aussie rite of passage: a year backpacking in Europe. She returned to Australia a more worldly woman and embarked on a master's degree in communications and a career in corporate Australia. Four years later, she decided she wanted to do something more meaningful than make rich people richer, so she traveled Guatemala with the intention of spending a few months helping to spread the wealth around a bit more. That was in 2006, and she's still here. Laura has spent much of her time in Guatemala working for non-profits and of late, has been the crack reporter for La Cuadra.
Read more by Laura Shearer

NGO - NGO Review – As Green as it Gets