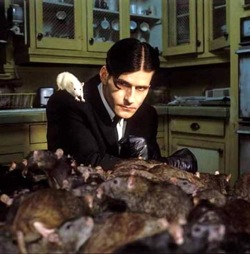 In the last several issues of La Cuadra, our founder and copublisher has been taking readers through some of the odder jobs that he’s held over the course of his life. This one, entitled Part-Time, Part III (Part One), which we first heard over a bottle of mezcal at Café No Sé is too long for our standard format – thus the Part One part. It will be serialized over the next few issues. Trust us, it’ll be worth the wait.

The tiny room I lived in, in the large Soho loft, was like something out of Being John Malcovitch. It had been haphazardly pieced together by previous tenants years ago who must have been a family of traveling gnomes with gyroscopic bodies. There were no right angles; in fact there were only very wrong angles.

I was trapped in a trapezoid and rooming in a rhombus; I was squashed in a square seen through a prism by a man with a cataract. But the geometrical terms make it seem like there was method behind the design. There was not.

The makeshift floor was of thin plywood and sagged and creaked over the beams. The hundred-year-old tin ceiling dipped so low on one side that I had to crouch. Yellowed paint flaked from it like vicious lichen, and the atomized eczema of the old, once-industrial building hovered toxically in the band of late-morning light that reluctantly pierced the grimed window panes.

It was a starving artist’s garret with none of the romance. It was more Kafka than Goethe, more Celine than Balzac.

But, hell, it was a room, the rent was paid for the month, and the rat that had just waddled its grey belly by the door was smaller than the other two that scurried by only seconds earlier.

It was summertime in New York and  hotter than the beach in hell. We were living five floors above a place called The Gourmet Garage, which by day sold overpriced produce, cheeses, meats, and an abundance of prepared foods to both long-standing locals and the throng of professionals who had recently infested what once had been artists’ lofts, and prior to that, factories..

That wasn’t the only infestation. By night this very Gourmet Garage was teeming with rats. It had been this way for weeks. The entire place was one giant Habitrail with rats of all sizes crawling over the beautifully merchandised fruits and vegetables from around the world.

They licked the meat-slicer behind the counter and gnawed the chimay, brie, and camembert in the open display refrigerators. They danced and defecated on the danbo, peed on the ptarmigan, shat on the stilton and dragged their tails over the tilsit. Yellow curved teeth and pink pustulant tongues sampled all there was to sample in this giant gourmet deli.

We had informed the owners that this was taking place but they ignored us, were rude in fact, and told us it was none of our business. Now their rat problem had become ours.

I lay there on the futon on the floor and wondered if there had been recent cases of the bubonic plague in New York. I wondered if I was breathing in dried rat feces. Surely they were living in a nest above the tin ceiling above my room. Of that there was no doubt. At night I heard them clawing against the tin. It made it difficult having female company in my little room for the night. I slept with one eye open for fear my face might be gnawed off. I pondered these horrors. I pondered the rat that had recently come up through the toilette and . . .

Then Shauna, the woman I rented my room from, yelled my name. I was wrenched from my rat reverie. I put down the classifieds which I had been futilely and faintheartedly scanning for work.

Shauna ran a freelance casting agency specializing in the impossible jobs, the ones where the time-frame for the job was yesterday, or the budget was paltry, or the mission preposterous. Her jobs had been keeping me alive the last six months.

I threw on some clothes, looked both ways for rats, passed through the door and bounded down the flight of uneven stairs to the open, spacious part of the loft.

“We’ve got a good one,” she said. Shauna was lying on the floor. Her legs were splayed and she wore dirty, ripped dark green leggings.

In front of her was a cup of coffee, scattered Polaroid photographs, contracts, colored pencils, high-lighters, a carrot, a pack of clove cigarettes, tarot cards, a box of tampons, ten disposable cameras, and her Rolodex. This was how she worked. Desks were for common mortals. They were the ball and chain of bureaucrats. She was an artist, a producer, a fortune teller. She was Madam Sosostris, Gertrude Stein and Cecil B. Demille all rolled into one.

“You’ll just love it,” she said. “It’s just the craziest. It’s a job for NIKE and Foot Locker.

I quickly did the calculation, ecstatic that I was going to be able to pay next month’s rent. “Seven-hundred-and-twenty dollars,” I said.