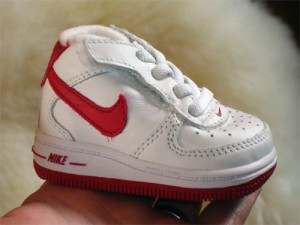 In my backpack was a clipboard, a Polaroid camera, and a badge that said the name of the production company. I had two hours to kill before I needed to be down at Basket Ball City seeing if Little Feet was one of our Cinderellas.

I cut over to 6th Ave. and caught the subway to Columbus Circle. I got out and walked up through a bustling Central Park. I cut over to the running path around the reservoir. The sunlight was bouncing off the giant fenced-in pool of water. There were runners everywhere. I looked at my watch and noted the time.

I had not thought much about how I would approach the women runners. What did one say? “Err, excuse me, but I could not help but notice you are wonderfully athletic and have an awfully tiny foot. Might I talk to you for a moment?”  No, that would not work. Or, “High, my name is John. You have small feet, right? Wanna make some money?”

No, that would not do either.

How on earth was I to do this without seeming like some sort of perverted stalker? First of all the women were moving, and secondly I had to look for the ones with the beautiful sinewy legs, zero body fat, and toothpaste smiles. Should I begin by looking down at the feet, do quick size calculation and then race my eyes up to ankle, calf, thigh, buttocks, belly, and breasts to see if the rest conformed to the specs?

Or should I do it the other way around? And then, once I believed that someone was Miss Right, should I dash after her or wait until she had made another loop around the reservoir and head her off? What happened if she did not make another loop?

How was I to do this without getting maced or arrested?

I slung the production company  badge around my neck and tucked in my shirt. I took the clipboard out of the backpack and held a pen aloft in my hand so I would at least look official.

Official-what I was not sure.

Runners of every body-type and fashion-faux-pas passed. There were shirtless men with bushy-haired chests and tight shorts more out cruising than running. There were lumpy mothers in baggy sweats despite the heat with jogging-strollers and angry babies. There were visible midriffs that would have been better left covered and people wearing ankle weights, those with loping strides and those who  hobbled, but with pace.

There were those who ran effortlessly and those who looked like they’d be carted off in ambulances. A few gorgeous women floated by but they were lanky-model types. You could see they had been competitive, and their feet . . . I was certain that their feet were perfect . . . just not for this job. I wished I had a pair of sunglasses so my gawking seemed less obvious.

Then, as I was just about to give up hope, I saw a woman who seemed different than all the rest. There was something about how her arms and legs worked in inverse relationship; something about how (when the  right knee was driving forward the right hand was coming down and vice versa) her strength seemed to emanate from her pelvis and taut belly. She had beautiful thighs. There was coiled energy waiting to explode, but reined in. She had white sun-block on her nose like a life guard and her blonde hair was pulled back in a no-nonsense pony tail. I zoomed in on her feet. My God! Itsy-bitsy feet! It was like fishing all day and just as you are about to go home . . .

I lost my composure and did not think. I ran, clipboard in hand, after her. “Ahh, excuse me. I know this seems strange. I need to speak with you.” I was running beside her. I was wearing long pants and shoes. My pen flew out of my hand. The paper in the clipboard flapped like the broken wing of a spastic duck. My Cinderella runner turned her head. Her arms and legs were moving like pumping pistons in a beautiful engine. She looked at me, and then must have pressed some button somewhere deep in the gorgeous engine of her body that sent her into overdrive. I had visions of an Olympian sprinting for the finish line as I was left in the dust and watched her legs kicking around the bend of the reservoir.

I caught my breath and staggered off the path to a bench and sat down. I looked at my watch. It was 2:47. Athletes are Type-A personalities and stick to training schedules, I said to myself. OK, I’d come back tomorrow at the same time. Maybe by then I could refine my approach . . .

Please join us in a few weeks  when John (hopefully) takes us on the next leg of this increasingly bizarre journey. We haven’t even met the thief, the tranny or the murderer, yet.