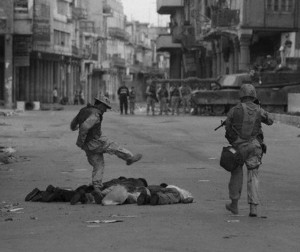 A few months back the progressive political organization, MoveOn, got fed a raft of well deserved shit for calling General David Petreaus, “General Betrayus” in a New York Times advertisement on the eve of his first round of Congressional Testimony – the one in which he called for “The Surge.”  Which, by the way, is working.  You know how I know that?  Because every time I turn on the television there is some inane, blow-dried, botoxed, balloon-titted, bleached blond harpy yapping that particular meme in my ear:

Well, actually, it ain’t working.  It won’t work.  It can’t work.  The United States is an occupying force in a country where, at least, a sizable minority of the population wants us gone.  And those folks have access to an arsenal that will make our stay too painful, too expensive, and too dangerous in the not much longer run.

It doesn’t matter that some of them want us there.  It doesn’t matter if some progress has been made.  There are enemies with access to an infinite number of shoulder launched grenades, machine guns, mortars, rockets and suicide bombers.

Zealous idiots like Rumsfeld, Cheney, and the rest of that conspiracy of fools, with all their smarts and think tank drivel, didn’t understand that warfare in the 21st Century – particularly occupation warfare – is fundamentally different because of the ability of non-state actors to get their hands on massive firepower while hiding in the population.

But the MoveOn folks still got it wrong.   The correct word play on the general’s name is to wonder if the type of victory he foresees is “Petreaic.”

‘Course, no one would have gotten that joke.

The Good General was on the Hill again recently asking for endless war on the installment plan.  The spongiform creatures known as Democrats (Russ Feingold, D-Wisconsin, excepted) tried, rather weakly, to get some metrics that would help to define either a victory or a loss in Iraq.

The General, of course, refused to cooperate.

Rather, what he said was, “War is not a linear phenomenon. It’s a calculus, not arithmetic.”

But let’s keep focused on the arithmetic for just a moment.  Here are some chilling numbers compiled by the Congressional Research Office, and a few others from John McCain, Iraqbodycount.org and The Lancet.

And then there are the Iraqi dead.  Those numbers are hard to come by,  because they expose the true horror of this war, but they range from a low of 90,000 (IraqBodyCount.org) to over 650,000 (study published by the British Medical Journal, The Lancet in 2006 – almost two years ago).

On April 1, this year, John (Surge Me Up Before You Go-Go) McCain was asked about that number on the David Letterman Show.  His response, almost cavalierly, was:  “It’s in the hundred of thousands, obviously.”

Please, no more bullshit.  No more dissembling.  No more dithering.  Look at those numbers.  Look at your children.  Look in the mirror.