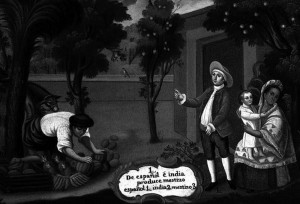 Antigua is thought to be a Spanish colonial city created, developed and inhabited primarily by the Castilian conquerors and their descendants. Reality is quite different. When the conquerors’ site of power was moved to Panchoy Valley after Almolonga was destroyed by a mudslide from Volcán Agua in 1541, there were, at most, 100 Spanish families.

They occupied the blocks nearest the central park.  The remaining 41 blocks of the city, reputedly planned by Juan Bautista Antonelli, were settled by Indians – either Mexicans who had helped with the conquest, or liberated Guatemalan slaves who had learned a trade.

As the Indians became scarce due to over exploitation, illness and their forced exportation to other Spanish dominions, the Spanish and Criollos began importing blacks from the Caribbean. This added a novel ingredient to the city’s population. Blacks became integrated and their descendents acquired education and prominence. In 1651 José de Porres, a free afromestizo, started his career as an architect and became the most important builder of the second half of the XVII century.

He participated in the construction of the cathedral from its inception in 1669 and was its master builder from 1672 until it was completed in 1680. He also built the Episcopal Palace, the School of the Company of Jesus, the Saint Francis Convent and chapel of Saint Anthony of Padua, the church of Saint Theresa, as well as many houses, grand and small, all over the city. In the outskirts he built several churches and chapels, too.

In addition to these qualified trades and distinguished professions the Indians, and to a lesser degree the Blacks, provided manual labor to extract rocks from riverbeds, carry them on their backs to the city, trim and polish them and fit them on the streets which have more or less 250 rocks per quadrant; you may do the rest of the math. They also participated in the construction of all churches and built adobe walls for all houses. Indians, mestizos, blacks, zambos and mulattos contributed not only a significant amount of intellectual value, but also their labor  to the development of the city of Santiago de Guatemala, our La Antigua.  They can thus be considered, historically, majority players in this cultural monument.

By 1750, a few years before the Santa Marta earthquake, Santiago had 38,200 people; 6,500 (17%) were Spanish or Criollos, 6,700 (17.5%) were Indians and 25,000 (65.5%) were mixed castes; that is, mestizos, zambos, mulattos, cambujos, sambaigos, alborozados, moriscos, tente-en-el-aires and other exotic peoples. Antigua was by then a truly mestizo city; thus it should come as no surprise that it continues to be one today, except that now there are also gringos, Swiss, Australians, Argentinians, Chileans, Ethiopians, Italians, Spanish (second time around,) Germans, Peruvians, Dutch, Cubans, Canadians, Belgians, English, French, Swedes, Norwegians, Salvadorans, Costa Ricans, Japanese, Koreans and Capitalinos. As all previous races and castes, these new immigrants will leave their mark, contribute to the richness and become important cultural partners in Antigua Guatemala, a city as seductive as the sirens of its fountain, immortal in spite of the earthquakes and of Spanish style, but of a nature as mixed as a Guatemalan chirmol.

The Mutually Assured Destruction of Trump and the Intelligence Community
By Michael Tallon
Saturday, March 18th, 2017