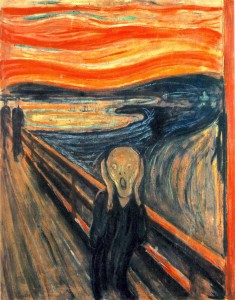 You know the famous Edvard Munch painting, The Scream. Well that’s me. I’m standing on a bridge, mouth agape, hands pressed to the sides of my head, looking like some agonized ET. Behind me is a smeared, blood red sky. I contemplate jumping.

Then I look down and ask myself, “Do I really want to be found dead in the dry riverbed below? The one littered with plastic bottles, potato chip wrappers, and every other bit of pre-apocalyptic, plastic packaging detritus? That’s not very romantic. Better to get stabbed by an angry husband, or shot at the poker table, or die of drink and a liver that has turned to foie gras.

Besides it’s a beautiful day, and a chicken bus barreling by has just coughed black soot on me, and the volcano in the distance is postcard perfect. Everything will be alright. No, I’m not going to do it. It’s all going to be ok.

But what little nothing had me on the brink?

I recently had the misfortune of wading my way through the self indulgent, pompous and bestselling tome, Black Swans (Impact of the Highly Improbable) by Nassim Nicholas Taleb. The book is larded with footnotes that are inane asides, and the author, in an effort to show us how erudite he is, makes reference to seemingly every book he has ever read, and surely did not understand.

Taleb uses the metaphor of a black swan to explain the probability of significant and unpredictable historical phenomena. As he tells us, before the discovery of Australia, people in the Old World were convinced that all swans were white. Then, with the single sighting of a black swan in Australia, this age-old belief based on empirical evidence was obliterated. This “illustrates a severe limitation to our learning from observation or experience and the fragility of our knowledge.” He then goes on to explain that a Black Swan in the historic sense is a highly improbable event with three principal characteristics: It is unpredictable; it carries a massive impact; and after the fact, we, the dim-witted masses, concoct an explanation that makes it appear more predictable than it was.

Certainly, all these events had huge and negative impacts – and perhaps predicting the exact moment of their occurrences would be nearly impossible – but to imply in any way that they were improbable and unforeseeable is not only ludicrous but dangerous. One does not need to know how to read a Dodo bird’s entrails to have predicted these events. For example – at least a year before the crash of 1987 there were thousands of voices warning that price earning ratios of stocks were in nosebleed territory, that program trading was creating lethal volatility and that, at a minimum, a huge correction was on the way. When exactly? Well that was a little trickier to discern, but the reckoning was certain.

The same held true for the internet bubble. From 1999 to 2001, for every corporate shill and new economy cheerleader there were as many Cassandras saying the only thing new about the “new economy” was the name and charlatan accounting. They predicted the internet bubble’s rapid demise, and moreover they sounded the warning that the boys on Wall Street were already cooking up the next Ponzi scheme. (Which, by the way has just come home to roost in the form of a global credit crisis.)

And to suggest that 9/11 was unpredictable or improbable is patent idiocy. It implies that everyone believed the rest of the world loved the United States, its often predatory economic policies and its less than peace loving foreign policy. It implies that no one believed that there would be retaliation against the hearts of the system – Wall Street and the Pentagon. Remember, in 1993 a car bomb was detonated below Tower One of the World Trade Center. The bombing was planned by Kuwaiti born Ramzi Yousef. Khalid Shaikh Mohammed Ali Fadden, Yousef’s uncle, was later considered one of the principal architects of the 9/11 attacks. Duhhh. . . 9/11 unpredictable, improbable – I think not. It had already been tried.

Being aware of something and being prepared for it are not birds of a feather, as we have seen time and again.

What is toxic in Taleb’s thesis is that it states repeatedly that we are hard wired to see specifics and not generalities. A “can’t see the forest for the trees” kind of thing. Therefore we miss these telltale signs of the unpredictable, and are thus either vulnerable to (or not astute enough to take advantage of) these aberrations. Only Taleb and a few of the enlightened are able to discern the big picture. In other words, we are not evolved enough to know what is going on, and by no means complicit in, or culpable for, the events that unfold, positive or negative.

Oh really? Let me pose another theory, a very simple one. We as individuals, corporations and governments, too often put our individual immediate interest ahead of a collective long term interest. We tempt fate and ignore consequences. We get caught up again and again in the suck of greed. We are conscious, or at least semi-conscious, of the potential long term consequences and risks, but the immediate payoff is too important. We convince ourselves that the future will never arrive. We rationalize, ignore, speculate and hope. We live for today, putting our faith in a tomorrow which will invent some new technology, or provide some fantasy free market deus ex machina to clean up the mess we’ve created. We look for narratives that support our rationalizations, (and there is always some one to hawk them to us). And when things blow up, we act surprised. And then someone like Taleb comes along and writes a nonsensical tome that becomes a bestselling canard dressed up in a swan suit and smelling like goose shit.

Worse yet, the book is widely embraced because it attempts to absolve us of complicity and responsibility. It in effect says, “We could not see it coming.”  “I could have done nothing about it, I had no hand in it.”

By Taleb’s same logic, global warming is a Black Swan, so is the rise in oil prices, the collapse of the dollar… Hmmm…