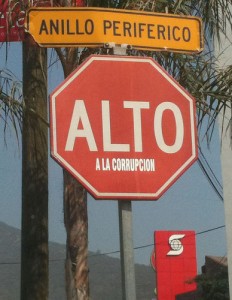 These are different men, and who was ultimately elected in 2011 does make a difference.

Just consider what Perez Molina and his Patriota Party have done in one month since his inauguration. In that time they have managed to approve a tax reform and tax evasion law that had languished in the corrupt congress for years and that had left Guatemala with the lowest tax revenues as measured by percentage of GDP in all of Latin America. Those paltry tax rolls have led to a complete inability to respond to the pressing needs of its population. This was his first, and perhaps most important, victory against a legislature that had become a den of money-grubbing parasites. He now has a workable budget, and security, education, and health should follow in its wake. Ojalá.

Some critics complained that Patriota had ramrodded the bill through the congress. But Baldizón’s party, Lider, had already set a date to call the Finance Minister before the congress to be interrogated. This is a Guatemalan form of filibuster, which allows any party to paralyze the legislative agenda for as long it can keep coming up with questions for a minister — another law that Patriota hopes to change. Patriota was successful in this move by forging alliances to get the tax reform passed just before Baldizón’s party was about to paralyze the agenda. Patriota also beat Baldizón’s deadline by getting approved a new Ministry of Social Development to replace Sandra Torres’ unaudited give-away programs for electoral purposes. It also approved a new housing law to aid in the drastic shortage of housing for the poor, and set up a governmental Secretary of Transparency under the office of the Vice President, Roxana Baldetti, the first female vice-president of Guatemala. It also got congressional approval of joining the Treaty of Rome, which stipulates crimes against humanity and their prosecution by international courts. While this Treaty cannot be applied retroactively, it is worth mentioning that trials against army high-command officers, including Gen. Efraín Rios Montt, for genocide or crimes against humanity have proceeded in the Guatemalan court system without any interference on the part of the new Perez Molina government.

All this in one month.

Other critics have complained that other laws against corruption to guarantee transparency in the government’s use of the taxpayers’ money should have been passed first, but, although Perez-Molina has a package of these laws ready, there wasn’t enough time before Baldizón’s deadline to forge a majority consensus on laws that had languished in the congress for years. These laws include one against illicit enrichment by functionaries; a civil service law to avoid the complete turnover of the government bureaucracy every four years to repay campaign favors; a law to eliminate bank secrecy, so that the taxman can monitor tax-evaders’ bank accounts; and a reform of the office of Government General Accounting, the watchdog auditor that must guarantee transparency in the use of public funds.

This package of laws has now been put on hold in the congress, because Baldizón’s party has attempted to begin the interrogation of the Finance Minister. Curiously, many members of congress, not even from the Patriota party, have expressed their displeasure with Baldizón’s tactic for paralyzing the legislative agenda by simply not showing up and denying his party a quorum. Ironically, this will also only extend the delay further. Or perhaps these other parties would also just prefer to delay the passage of laws that might hit them in their pocket books.

The great challenge for Perez Molina will be this den of thieves in the congress that has turned the legislature into a “biznis.” Perez Molina has a plurality with 62 Patriotas in a congress of 158 members — but not a majority. The irremediable damage and divisions that Sandra Torres’ obsession for power has caused in the former ruling party, UNE, has created significant desertions of congresspersons from that party. This group of independents will be the deciding weight in future votes. Perez Molina will need all the parliamentary skills of his vice-president, Roxana Baldetti, who led the Patriota party in the congress for years, to make the necessary deals without compromising principles.

That’s my caveat offered to Mr Casas-Zamora: it’s not all about who won the presidential election, but it still does matter quite a lot.

The population seems to agree: in the latest poll 67% believe Perez Molina will fulfill his electoral promises; 66% believe he will improve the security of the country; 77% believe he will improve the system of education. His lowest number is only 36% believe he can eliminate the historically endemic corruption in the country. Only time will tell whether such skepticism reflects the historical, fatalistic memory of Guatemalans or an understandable error of judgment like Mr. Casas-Zamora’s.

Mr. Casas-Zamora’s apparent solution to Guatemala’s intractable problems is to bring in the international community to run the place, because obviously the Guatemalans can’t do it themselves. As readers of La Cuadra (March / April 2011) will know, I strongly supported the presence of the CICIG (The U.N. Commission against Impunity in Guatemala) whose mandate in the country has already been extended by President Perez Molina, and I continue to support this international aid and vigilance, but, in this observer’s opinion, an invasion of international agencies to monitor or run Guatemala would be the worst thing that could happen — both to the country and to Guatemalans as a people. As I ended my former article in La Cuadra with a quote from former U.S. Ambassador to Guatemala, Stephen McFarland: “Ultimately it depends not on the imposition from outside, but an acceptance by Guatemalans.”

President Otto Perez Molina just might be able to help make that hope a reality.