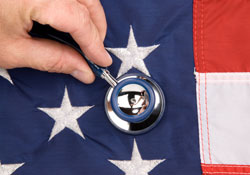 In this ongoing analysis of health care reform, we took a brief diversion (La Cuadra, Volume V, Issue 4, July / August 2011) to look at the political context in which the debate takes place. And we’re proud to note that we spotted the ascendant Herman Cain phenomenon early on (slightly after Jon Stewart, but well before 9-9-9.)  Today we return to the debate proper, within the lingering question of whether or not the nation is trapped by its own cartoonish self-depiction as a collapsing empire. Really, how far are we from the day that one of the opposing presidential candidates simultaneously accuses the President of building a fence along the Rio Grande to keep American workers in, while claiming that their own electrified fence would be the perfect solution to keep the Mexicans out?

That message would, of course, be embedded in the larger conservative dogma of: deregulate, drill and don’t ever tax people, especially the job-creators.

Meanwhile, Obama soldiers on: his drone-aircraft delivered message to Al Qaeda more effectively finding its mark than his domestic agenda to the American public. Despite success as community organizer cum Commander-in-Chief, the Great Recession has so far prevailed. Job plan follows job plan, ignored by Congressional opponents and suspicious supporters alike. Voters dislike the economic titans but government scores even lower in the polls. Movements to “Occupy Wall Street” highlight income inequality and have served, at least for now, to challenge deficit reduction in the headlines. Meanwhile, we await the Thanksgiving gift of the Supercommittee, hardly noticing our tacit admission that representative government is on the ropes.

We’ve come a long way from Joe Biden’s “big….deal” whisper into the President’s ear in what seemed a moment of genuine triumph, the passage of the Affordable Care Act (ACA).

Election Day is twelve months away, and while it’s never easy to predict the dynamics of a Presidential campaign, it seems likely that “ObamaCare’s” lightning-rod status on the Right has receded from its post-passage intensity. Unemployment has taken center stage. Deficit reduction, including Paul Ryan’s budget plans to dramatically alter Medicare, showed the potential to create big problems politically for the Republicans. And in any case, the likely Republican candidate Mitt Romney will hardly want to highlight “ObamaCare” as it is the issue on which his record most agrees with the President (before Romney’s epiphany with the Right).

While polls show a slightly negative tilt toward the health care law, fueled by partisan identification, there’s no consensus for an alternative. Many of the early improvements in existing insurance practices (staying on the parents’ policies, reduced pre-existing condition bans) even draw strong support. Still, the White House is wary. Given the signature passage of a law which had eluded Presidents for a century, health care may simply be too complicated for Sound-bite Nation. Further, the law’s real change (bringing coverage to thirty-two million more Americans in 2014) may not appeal to a fearful and divided land.

Before any votes are counted, however, the Supreme Court may well have their say. A critical issue they may consider is whether or not the Commerce Clause of the Constitution permits the Federal government, as it does in the ACA, to mandate that persons purchase health insurance. A second issue, whether the Congress can order states to maintain nationwide standards for the Medicaid program, seems less likely to engage the Court. Beyond the specific issue of the purchase mandate will also be the question of whether the Court’s striking down that part of the law would invalidate the ACA as a whole.

A fascinating sidebar to this speculation is whether the Court will even take up the substance of the conflicting lower court decisions. Some argue that the Court will sidestep the immediate controversy by deciding that provisions of law which take effect in 2014 are hardly ripe for an immediate Constitutional test. That’s the substantive argument. A more nuanced issue is whether the Court, with its 5-4 Conservative majority, would want to directly challenge the Executive Branch with what might be perceived as a second “Bush v. Gore” type intrusion into electoral politics.

Whatever the action by the Supreme Court, the shape of the 2012 election frames much of health reform’s future. Most commentators believe the House will likely stay Republican. Absent an unforeseen realignment of the current political landscape, it seems unlikely, even with an ascendant grass roots movement on the left, for Democrats to overcome the 2010 Republican surge in the House.

With just about twice as many Democratic incumbents as Republicans up in the Senate (George W. Bush’s faltering 2006 popularity the proximate cause of a class of Senate Democrats facing their first reelection) and several vacant seats previously in the Democratic column up for grabs, improved Republican numbers, perhaps a majority, seems a likely Senate outcome.

Democrats would, under all but the most extraordinary of circumstances, at least hold a filibuster-empowered Senate minority.

The health care implications of the election would play differently depending on the scenario. Let’s consider some of the more probable post-election possibilities.

If President Obama wins re-election, he would most likely face an immediate ACA repeal effort from the House, perhaps with Republican majority support in the Senate. If that turns out to be the case and Senate Democrats in the minority then threaten filibuster, Republicans would likely counter with a turn to the budget reconciliation process to decimate both the subsidies and administrative supports necessary to implement the law. In this scenario, the most likely result would be the White House, urgently needing to find a governing consensus, open to at least some changes in the ACA.

With the same Congressional results, a President Romney would be faced with a remarkable set of choices. This really was his law before it became Obama’s law. In Massachusetts in 2006, he combined expanded public insurance, subsidized purchase of private coverage through an insurance exchange, and a mandate to purchase coverage (or pay a penalty) into a universal insurance plan. An individual mandate, argued Gov. Romney, was simply enforcing the conservative value of personal responsibility. There were to be no free riders in Mitt Romney’s Massachusetts plan.