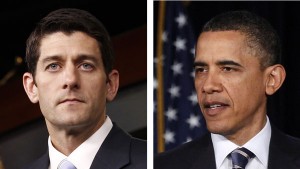 The Spring 2011 version of the health care debate has taken on the look of Russian matryoshka dolls, although one measures the risk of conspiracy theory in even mentioning the term. Health reform has become nested within a broader debate about Federal deficits and national debt, which, in turn, is nested in an emerging debate about the future of the American society — focused especially on the role of government, the dependence on private markets to deliver basic services (See: The Predator State, James Kenneth Galbraith, 2008), and an acceptance of an “inevitable” economic inequality among its citizens. Republicans claim that the Affordable Care Act (ObamaCare to its detractors), combined with massive Great-Recession-generated deficits, ultimately risks the nation’s stability in the world economy.

Recently the debate has been dominated by changes proposed for the future of Medicare. House of Representatives Budget Committee Chairman Paul Ryan, a Republican from Wisconsin, advanced a proposal to shift Medicare from the current program which pays doctors and hospitals directly for services provided to the nation’s seniors to an approach called “premium support” by analysts, vouchers to the layman, where the federal government provides financial subsidies to seniors who would then buy insurance coverage in the private market.

The change would take effect in 2022, more than a decade hence. It would have no effect on current beneficiaries or those who reach 65 years of age between now and 2022. The value of the vouchers would grow at the rate of the Consumer Price Index (CPI), estimated at 2.5 percent annually. Per capita health spending is projected at 5.4 per cent annual growth. Under this plan, therefore, the beneficiary would be exposed to dramatically higher out-of-pocket costs over time. Ryan argued that a drastic cut in future Medicare spending was an essential step if the nation was to reduce dramatically its long-term debt.

Medicare beneficiaries, according to Ryan, could limit their own out-of-pocket costs by shopping for value in an open health care market. Skeptics, however, see the proposal as a massive cost shift to future seniors.

For Democrats, Ryan looked like a political Easter Bunny. He had broken the Government’s promise that future retirees could depend on access to necessary health care. Democrats knew that the same block of senior voters who had abandoned them in 2010 over the fear generated by largely false charges against the Affordable Care Act could be encouraged to suspect the Ryan agenda, even if protected from its provisions. Seniors are back in play for the Democrats in 2012.

House Republicans adopted the Ryan proposal, along with other deep reductions in spending, as part of their budget resolution for 2012. They have recently signaled caution, however, in pushing the dramatic Medicare proposal further before the 2012 elections.

As attention retreats from this skirmish about Ryan’s long-term vision for Medicare, now more than a year after passage of the law, the Obama Administration is carrying out the early provisions of the ACA.

Programs to allow high-cost, high-risk previously-uninsured persons to buy coverage, with federal financial support, now exist in every state. In half, the states took the lead. Elsewhere, in those states opposed to the ACA, the program is under federal control.

New provisions halting the ability of insurance carriers to deny coverage for pre-existing conditions for children or to terminate the coverage of high-cost patients have taken effect. While some temporary waivers have been granted, provisions capping the ratio of administrative to medical care costs in determining health insurance benefits have been applied.

Along with billions of dollars in federal aid to support the adoption of electronic health records by doctors and hospitals (a provision of the 2009 Stimulus Law) federal authorities are providing grants and developing regulations to encourage the creation of better coordinated and more cost-effective arrangements for providing care. The idea is simple: Don’t pay separately for every doctor’s visit, every test, every procedure; instead, require that doctors, hospitals, pharmacists and other providers work together. Pay them to maintain quality standards, but also with incentives to reduce costs.

Administration leaders also have provided grants to selected states to improve enrollment practices in public insurance programs for the poor. Further, they have begun planning for the exchanges which will be the “insurance stores” through which individuals and businesses will purchase insurance, thereby avoiding a mandated tax penalty for remaining without coverage. Both individuals and businesses will also access subsidies through these exchanges.

Or, The Brazilian Supermodel’s Got Brains, too!
By John Rexer
Sunday, January 13th, 2008