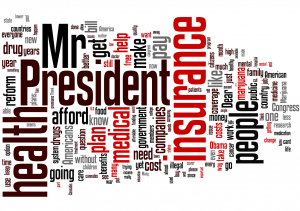 This series of commentaries now enters its fourth year in a continuing effort to achieve two goals. First, we hope that lay readers are provided insight on the latest efforts toward health care reform in the United States. Second, we hope that through the lens of health care reform those same readers can contextualize the competing political and philosophical forces at work in Washington, DC as the world continues to morph and change in these conflicted and complex times.

Health care is a big-deal issue for all of us. It goes to the core of our personal well being, literally. It’s existential. Through the health care system we are assisted into the world; it is where we seek professional refuge in times of illness. For many it is the final reality before life’s end. Coming into contact with the health care system reaches deeply into, and often beyond, our financial resources. It offers the elation of successful treatment and the tragic news of failure. And it is accompanied by a mind-numbing administrative complexity. Birth, life and death (and maintaining health throughout) would elicit existential considerations even if we were still hunting and gathering our way across the Great Plains. But we aren’t hunters and gatherers, and determining how to address those existential issues has, regardless of the rhetoric of individual, market-based initiatives, become a national political question. And it has become so just as the systems of national governance seem to be fundamentally breaking down.

Our earlier commentaries have told the story of the unlikely journey through Congress of the Affordable Care Act, labeled immediately by the President’s opponents as ObamaCare, an appellation now seemingly accepted if not embraced by a White House looking to enumerate the administration’s accomplishments. Over these four years, we’ve also analyzed the emerging political realities that shape the evolving future of the health care reform debate. Today we would like to do both.

The political New Year begins with a narrowing skirmish for the Republican Presidential nomination. Mitt Romney, the man with the money but not “true conservative” street credibility, is fighting off challenges from a passel of non-Romney alternatives that would be more acceptable to the party’s true believers. Apparently, however, the true believers are experiencing the singular problem of not being able to agree upon their true beliefs. Social conservatives seem, for now, to be coalescing around former Senator Rick Santorum of Pennsylvania, though former Speaker of the House Newt Gingrich and current Governor of Texas Rick Perry are still in the race. Meanwhile, the libertarian wing of the base has, thus far, stood with Ron “The Energizer Bunny” Paul in the battle for delegates.

In the race for the nomination, “Repeal ObamaCare” has emerged as standard Republican boilerplate. Santorum, Gingrich, Perry and Paul all believe it, while Romney has managed to accommodate “that was then, this is now” to explain his current rejection of financing expanded insurance coverage pools by mandating that individuals purchase insurance. That he once described the individual mandate as wholly consistent with the conservative tenet of personal responsibility may or may not cost him the nomination this time around. Time will tell, but our role here is not to further add to the clutter of commentary and prognostication as we move towards the Republican National Convention in August of 2012.

How will a potential running mate enhance or balance the nominee’s ticket? Will a mystery candidate emerge? Might there be an extended round of jockeying for a third party candidacy? All that is in the wind, yet somehow we’ll get to the summer and the main event.

One insight from the early rounds, however, is that you’ll never be far off the pace by betting on MONEY as the driving force to a win. Money has long held the high-ground advantage, and in a post-Citizens United world of SuperPac tsunamis pouring unlimited and untraceable millions onto the airwaves and other electronic portals, we’ll likely see a televised-in-30-seconds-sound-bite campaign like never before. Hence, if for no other reason, the nomination is still Romney’s to lose even though surprise has been a constant companion this time around.

Politically, much has happened since our last entry in November.

As the inside bet had predicted, the congressional attempt to delegate its deliberative budgeting role to a bicameral, bipartisan twelve-member Super Committee (more formally known as the Joint Committee on Deficit Reduction) turned into a Thanksgiving turkey for which few gave thanks — save for those nostalgic about representative democracy. Republicans won’t, or with current representation can’t, produce an agreement which brings in net new revenue. Read: taxes. On the other hand, Democrats (putting their base on pins and needles) appeared more flexible in reducing spending and altering the parameters of current entitlement spending — though, politically speaking, party leadership in Washington may have felt it worth the bluff, as they were unlikely to have their hand called in this environment for any genuine compromise. Having faltered politically from December 2010 through the August debt ceiling debacle, the politics were risky. The Obama White House was already in danger of a serious loss of support by the Democratic base. Yet, the failure of the Super Committee left the President free for the next round of confrontation.

Health care interests were pleased by the Super Committee’s failure. Already at risk for an across-the-board two percent cut in Medicare reimbursement rates, service providers would surely have faced even deeper cuts, including reductions in Medicaid spending, had there actually been a long-term compromise. Yet, the decision by Congress last summer, when the Super Committee was established, to sequester money from the 2013 budget (of which, importantly, half will come from defense spending) if the Super Committee failed to reach a long-term compromise, has allowed “advantage Democrats” to slip back into the political equation for the first time in at least two years.

The political sands shifted further toward the President as Tea Party House conservatives ended the year with what Speaker John Boehner called, in understatement, “not the smartest political move.” With the White House framing the debate as “Democrats want to protect middle-class families by giving them a deeper payroll tax exemption” and “Republicans are out of touch with middle-class families,” the President finally brought a street version of Chicago politics back into his playbook. Without reliving the inane details too deeply, the bargaining devolved into a mess. Senate Republicans, being less beholden to Tea Party extremism in their ranks, but properly reading the political tea leaves, agreed to a two month extension of the payroll tax reduction and lived to fight another day. The House Republican leadership thought it could sell the plan, but ran headlong into the Tea Party Express who wanted no compromise with this White House under, apparently, any circumstance. Speaker John Boehner, trying to ride two elephants at once, finally said enough is enough and got his caucus out of town just in time for Christmas, leaving a huge political present underneath the President’s tree.

All of these machinations affirmed a long-time political rule: When you are most in trouble, count on your opponents to overplay their hand. From December 2010 to a year later, Obama has been strengthened by the very Congressmen who had achieved his mid-term defeat. He now has Congress (with a nine percent overall approval rating) as an institutional target for a reprise of Harry Truman’s, “give ‘em Hell, do-nothing Congress” 1948 campaign. A campaign, which Governor Tom Dewey and overly confident Republicans learned just a few hours too late, that Mr. Truman ultimately won.