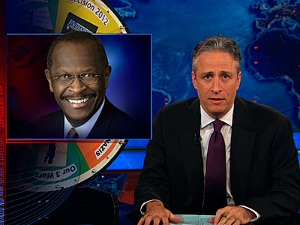 Presidential candidate Herman Cain, at the Family Leader Presidential Lecture Series in Pella, Iowa, promised that in his Administration no congressional bill longer than three pages would be signed into law. It’s on YouTube, if you want to see it. If he is elected president, he will only pass “small bills” that “you’ll have time to read over the dinner table.” This is so we can all understand the laws of this country. We can all discuss the laws of this country. And with our dinner-table common sense, we can all decide if they are good ideas.

The comment led to a recent campaign kerfuffle between Jon Stewart and Fox News. Stewart, mocking Cain’s lack of interest in reading with a mildly black inflection in his delivery, opened the door for a twenty-four hour Fox assault against the “racism” inherent in Comedy Central’s treatment of Cain, an African-American, Republican Presidential candidate, talk show host, and former CEO of Godfather’s Pizza chain.

In one sense, this was just another blip in the seemingly endless, twenty-four hour news cycles which will guide America to the 2012 Presidential election. Lost in the haze of commentary, the Cain / Stewart / Fox imbroglio disappeared just days later when MSNBC commentator Mark Halperin referred to Barack Obama as a “dick.”

And thus passed another week in America.

But wait a minute. Stop the torrent of emptiness. Herman Cain said that bills, indeed laws, should be only three pages long. Cain may be trapped in the Tim Pawlenty range of public opinion polling among Republican candidates, but he’s there on the debate stage. If the presidential campaign were like the NCAA Basketball Tournament, then in political bracketology, Cain is past the sweet sixteen, heading for the elite eight; he’s a businessman with a flair for language; he once famously challenged Bill Clinton on health care during a 1994 town hall meeting; and he represents a legitimate constituency within the orbit of his party.

And he said that bills should only be three pages long.

Consider this: What if, at this stage in our democratic experiment, this really is the debate that matters?

One of Majority Leader Eric Cantor’s attacks on health care reform (the Affordable Care Act or ACA) was its length. To express this he carried around the 2700-page bill to various televised committee meetings and press conferences and repeatedly referred to it as “this behemoth 2700-page bill.” So, is Cain exercising extreme hyperbole, or is he merely extending the “wisdom is inversely related to volume” logic of policy debate? At what point do clips from the campaign trail begin to actually shape the substance of policy discussion? Are we at risk of ever more examples of “death panel digressions” defining real decisions?

That should be a sobering thought.

Our enormous challenges today are to escape the depths of the sinkhole into which the American economy has fallen — to create real jobs, to teach the kids the skills for a new century, and, as has been my professional focus, to assure affordable health care for our people. All of this proceeds within the context of an intensely competitive world economy and physical threats to safety and security. You can build your own list of the big issues. But we can agree: there’s heavy lifting ahead.

This series of commentaries in La Cuadra has provided a contemporaneous account of, now, almost three years of health care reform debate — an important but discrete corner of the big picture. In this summer of 2011, a number of states are taking the initial steps to prepare for the coverage expansions scheduled for 2014 under the ACA, and an even larger group of states have joined in judicial challenges to the law, which will likely be resolved by the Supreme Court during the 2012 election season. Further, health care policy plays prominently in the continuing struggle between the President and the Congress to reach agreement on raising the national debt ceiling.

As described in our most recent commentary (La Cuadra, Vol. V, Issue 3, May / June, 2011), House Budget Committee Chairman Paul Ryan (R-WI) recently proposed a repeal of the Affordable Care Act and a series of reforms which would include the creation of block grants to pay for a reduced Medicaid program, and, in 2022, a full redesign of Medicare into a voucher support system. His proposal gave vitality to both parties. Ryan earned accolades for his courage from the right, and he enabled Democrats to unify in opposition, especially to the long term restructuring of Medicare.

Now in the heat of summer, the Republicans argue for no new taxes, no way, never again. The White House focuses on eliminating tax breaks for corporate jets, tax preferences for the oil and gas companies, the rich in general, and, borrowing a theme from Harry Truman 1948, Congressional indolence. President Obama’s centrist instincts offer up a hundred billion, here or there, in health care cuts obscured in a maze of formula changes.

Meanwhile, the nation lurches forward toward an early August deadline to increase the debt ceiling or, if the politicians are unsuccessful, an end to the world economy as we know it. Just another day in Politics, USA.

Which brings us back to Herman Cain.

At what point does the caricature of debate take control of the nation’s destiny?

Buddy Could You Spare A Trillion, Actually, Could You Make That Ten?
By John Rexer
Tuesday, November 18th, 2008