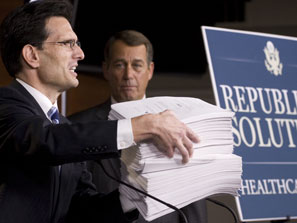 This series has explored, for the layman, the vagaries of both the political and the policy debates as the nation finally, after decades of failure, passed legislation enabling most Americans to obtain health insurance. We’ve explained that the law addresses a problem a long time coming. Health care in America costs more than anywhere else in the industrial world. Financing is fragmented. Service delivery is inefficient. Quality is uneven. And, most uniquely among nations, until full enactment of the ACA, we simply leave fifty million people without the means to pay for care.

The ACA expands Medicaid and subsidizes private coverage for 32 million people previously uninsured. It supports and enables health providers to better organize and coordinate their care. And it creates an Independent Payment Advisory Board to bring discipline to future Congressional decisions regarding Medicare payments. If all works as planned, as noted by Peter Orzag (former Director of the White House Office of Management and Budget, in the current edition of Foreign Affairs, presumably to reach international audiences), the ACA can shave a couple of percentage points off the share of US GDP going to health care at the beginning of the next decade and more beyond. That is significant. Yet, it still only imperfectly addresses one aspect of our national economy, which in turn is tied to an even more complex global economy.

Said plainly, the problems we face are complicated. The solutions are complicated. Our world is complicated. And it takes more than three pages to change our national course. The ACA is not a death panel. It’s not a government takeover. It’s an important but tentative step in changing the direction of a $2.5 trillion health care economy. And it is way beyond kitchen table conversation.

So are nearly all of the important conversations that we need to address in order to right this ship of state.

But the opposition doesn’t need, and doesn’t seem to want, to get caught in the details when they can just tell the public that the bill is “too damn long.”  And now, for health care reform after passage, the solution is equally as simplistic: Let’s just “repeal ObamaCare” and avoid the substantive debate. As to what the government should do, if anything, for 50 million Americans without health insurance, or a spending curve that continues to spike, the opponents are largely mute. “Just repeal the damn thing.”

If this really is the debate, we are in trouble.

As readers of earlier installments will note, your author spent some time, almost twenty years ago, in elective office. Wasn’t there always a slogan to support a candidate or a point of view? Absolutely. But the political environment has changed in several critical ways.

Back in 1988, the George H.W. Bush campaign proved that a dark, sinister, threatening television image of Willie Horton, a violent criminal offender, could be used to attack Governor Michael Dukakis, whose administrative decision had granted Horton a weekend furlough. What the Bush campaign learned was if you tell a negative story, in this case with racial overtones built in, and you tell it often enough, you will see the poll numbers move.

To me the first lesson of Horton, observed again and again in succeeding years, is that powerful, but ultimately insubstantial, attack ads can change electoral outcomes. If a candidate has creative talent, a very focused message and money, money, money, they can move the numbers significantly in their desired direction. No affirmative argument need be offered. The Presidential cycle in 2012 is now set to consume more than a billion dollars, much of which will be spent hammering out negative messages about the other guy, now at least gender neutral, should that be the case.

Secondly, we’ve traded an imperfectly developed tradition of public debate for the science of the tested phrase. Political consultants ply their trade in focus groups designed to find the precise words, preferably very few words, to provide ammunition for a cascade of multi-media messaging. Did Herman Cain just make up the “three-page bill?” I doubt it.

Finally, the incessant Republican attack on the institution of government as the problem, rooted in the era of Ronald Reagan, has taken a toll. Democrats have been indirect in response. Even from their side, governmental responsibility has been coupled with the language of market incentives. And bipartisan support for deregulation of financial markets set the stage for the Great Recession.

Even with the initiatives of the Obama administration, including the ACA, we now face a fundamentally important debate: are we still a polity? Is the goal of public policy to include the wellbeing of all Americans, or only those on whom the economy smiles. And all the while we seem caught in a structural unwillingness to raise tax rates, even to pay for fighting wars, much less for our health, education, or civic improvement.

Things have changed over twenty five years. We are no longer guaranteed a second American Century. But the immediate challenge is not whether we can succeed in shaping the decades ahead. It’s whether we can have an intelligent discussion about the choices. Cain’s three-page limit, and all of the other focus-group-designed catch phrases that will be hurled, from Democrats and Republicans alike, are a far bigger threat than we seem willing to admit.

The world is a complicated place, and if our debate doesn’t acknowledge that — if, in fact, it actively denies it — then we’ll likely have far more to worry about around the dinner table in the coming years than just the conversation.