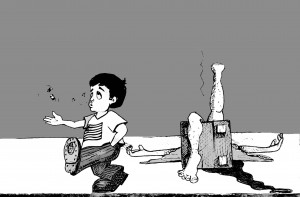 I recently read an article by Ron Jacobs entitled, A Conspiracy to Kill Iraqis?  His analysis of modern warfare and the near inevitability of civilian casualties for some reason dragged my memory back to my first year of law school, and the famous battery case, Garrett vs. Dailey, a standard included in virtually all first-year casebooks.  In this case, a five-year-old boy (Dailey) pulled a chair away from an elderly, arthritic woman (Garrett), just before she sat down.  Garrett fell and suffered injuries, including a broken hip.  Garrett sued Dailey for battery, and the case eventually found its way to the Supreme Court of Washington.

The court in Garrett grappled with the definition of battery and how that definition would apply to these facts.  Essentially, battery is defined as any intentionally harmful or offensive contact for which there is no consent or other legally recognized justification.  In Garrett, the court focused on the issue of intent, holding that a person is liable for battery if he or she knows with substantial certainty that their actions will produce a harmful or offensive contact.  The Supreme Court remanded the matter to the trial court for review based on its guidance, and the trial court subsequently awarded damages for the plaintiff, Garrett.

The approach to civil battery utilized by the court in Garrett is almost universally applied in U.S. jurisdictions today.

(a) it is committed purposely or knowingly; or

(b) it is committed recklessly under circumstances manifesting extreme indifference to the value of human life.

How does this analysis relate to Ron Jacobs’ Conspiracy to Kill Iraqis?  Paraphrasing Howard Zinn from his book, Vietnam: The Logic of Withdrawal, Jacobs writes:

“Since killing civilians is inevitable in modern warfare it cannot be called an accident.  Bombers and helicopter pilots don’t necessarily intend to kill civilians, but when they attack villages and crowded city streets they know that civilians will be killed. When soldiers and Marines on the ground cannot tell the difference between a civilian and an insurgent and are told to clear an area, they will kill civilians. This killing may not be deliberate, but it is not an accident.”

The civil and criminal legal analyses almost beg to be applied here.  Clearly, under the civil standard, bombers and pilots act with substantial certainty that their actions will cause the death of civilians.  Similarly, in the criminal context, under the MPC, these actions are taken with practical certainty that civilians will die.

Naturally, those who attempt to justify modern wars will proudly assert the righteousness of the cause and the great intentions of those prosecuting the wars.  Yet, when wars are justified by trumped up charges, bogus claims, and fabricated evidence, this line falls to the ground like poor Ms. Garrett, her chair pulled unceremoniously from under her.

Not so incidentally, the MPC defines criminal conspiracy as follows:

(1) Definition of Conspiracy. A person is guilty of conspiracy… to commit a crime if, with the purpose of promoting or facilitating its commission:

(a) he agrees with such other person or persons that they… will engage in conduct that constitutes such crime, or an attempt or solicitation to commit such crime; or

(b) he agrees to aid such other persons in the planning or commission of such crime or of an attempt or solicitation to commit such crime.

Special Commentary - The Diddling Bartender – Making the Noodles With Grandma

Special Commentary - At Play in the Fields of the Lord