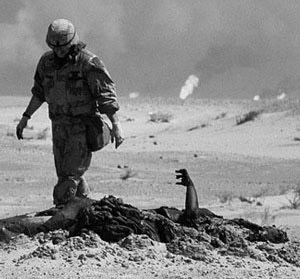 You were quick to hold up a small bottle for the cameras of the world, lying as you swore that it was full of death. Spewing your predatory American lies to the world of how you must use force to make sure that the sand niggers continued to be contained.

After the war you said, adding one monstrous lie to another, a new Iraq would be born. A peaceful child of the West aping your ways and repaying you with control of its oil, of its soil, and of its soul. The operation would be brief, the birth pangs almost painless.

We think the price is worth it.

The only thing these sand niggers understand is force and I’m about to introduce them to it.

Well is it a child or is it a monster?

Shall we talk about monsters, you and I?

No perhaps we should not talk of monsters. People do not talk to monsters.

Perhaps instead we should talk of peace. I would like that. “Peace,” I love the word. Can you tell me what it means?

Does “peace” mean not quickly putting on my shoes and jacket picking up the necessary things when I hear a bomb, and running to Abu Hussein’s house? Running sweating and praying. Pounding on Abu Hussein’s door:

Running with Abu Hussein and his sons.  Stumbling as I run towards the smoke. Knowing where to run automatically. Knowing that today it was my father’s turn to go with the others to the market. How will I tell my mother that my father, too, is dead?

Screaming our father’s name, my brother and myself are pushing the screaming, fleeing, bloodied people out of the way as we run to where the bomb went off. Doing as our trainers have shown us. Doing whatever it is that must be done to get there in the first few minutes.

Pushing the palm of my hand into the face of one who is too slow to get out of our way. Running to where the flames are, screaming my father’s name. An old man lies dead in a pool of blood and broken eggs, caught in a whirlwind with fire. I ignore him.

Moving with my brother to a pile of rubble. Doing as our trainers have shown us. Throwing hot chunks of metal and concrete to the side.

Everywhere inside there are pieces of flesh and blood and rubble. Pulling the living flesh from the rubble. Separating the living from the dead. Climbing over rubble to reach bloodied living flesh. She is so small she cannot be older than 5. The cars and the trucks and the vans begin to arrive. A man takes my bloodied burden from me and others run in to help. I run to the next shop.

There is nothing to be done here.

The others of my team are here. Doing as our trainers have shown us. Doing the things that must be done in the first few minutes. All 5 of us are here now.

Moving round the market with my team. Taking wounded people to the waiting cars. Where are the ambulances? Where are the police? Will the Americans stop the cars and buses and vans carrying the wounded and the dying to the hospitals as they have done so often before?

We move from stall to stall and shop to shop. Checking for survivors. I hear my brother’s voice screaming over the noise:

It must be that he has phoned his contact person in the radio station.

We let our eyes and our hands instruct our brain as our trainers taught us to do.

Even if it means abandoning them to their fate, you do not go in alone. Wait for your watcher.

Many of the piles of rubble are too big. We move on. When the building has collapsed completely or when you see concrete floors hanging and ready to fall, you must move on.