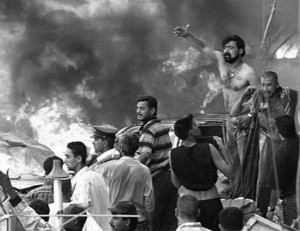 Too many are flooding into the market. Some to help, some to look, most are calling the names of others who were there. Many curse the police. Some start to throw stones.

Pushing and sweating against the cursing crowd letting through only those who say they have kin or who we recognise.

One of Abu Hussein’s sons pulls me from the crowd to tell me that his father wants to speak to my brother and me.

Be hopeful. Nobody has seen your father on any of the transports or at any of the morgues …

We will need good people to go to the hospitals and then the morgues. You have done this with your father.  Are you able to do it without him?

Hussein and Khalil will go with each of you.

We hug one another tightly, a fierce despairing grip. Gripping as the drowning must have gripped Othman Abdul Hafez, not wanting to let go of life, clutching the living and the loved. I go to one truck, my brother goes to another. Getting into the back with the bodies and driving to Imam Ali hospital. We drive behind a police truck also full of bodies. The smell of death is a mix of the smell of the sort of excrement you pass when you have drunk bad water and the meat market on a hot day.

It rises to surround me.

It is in my hair and my clothes and my throat. I will smell of death when I go into the hospitals. Khalil Ibn Hussein and I pray.

I do not know what Khalil is asking of God, he is probably doing as I am and asking God for help not to vomit.

Climbing out of the van the morgue attendants tell us to put the dead bodies on the ground. I hear a woman scream. Stepping over body after body after body as we walk to the emergency room.  Bloodied, moaning people on the floors of the corridors. Two old men on the floor against a wall.  Faces grey with pain, trying not cry out. More and more people being carried in. Many will die on the floor here as they have before. The people on the floor over whom we step will die of bleeding, and of pain, and of not enough doctors, not enough equipment to take the blood from those who arrive to donate, not enough space.

Going through to the wards.

No sign of our father. I look at my brother – phone?

We speak again to the guards and to the people who try to keep the records. Nobody has seen a man answering to our father’s description living or dead.

Back through the corridors.

One of the two old men has died.

O God! Pardon our living and our dead, the present and the absent, the young and the old, the males and the females.

We step over him as we leave. Stepping over more of the dead who have been left outside asking Khalil Ibn Hussein if he recognizes any of the newly arrived dead.

Some, none of your family. We have the names.

A telephone rings on one of the dead bodies. The same tone as on the phone we gave our father. Running my hands through the pockets of the dead boy to find the phone. A woman’s voice screams when she hears mine. Khalil speaks Kurdish. Gesturing to Khalil, “come here, come here,” handing him the phone.