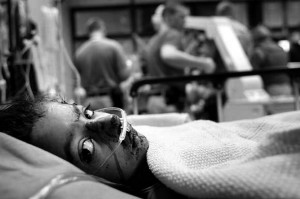 A 9-year-old Iraqi girl recovers from a skull fracture and two broken legs in the 31st Combat Support Hospital in Baghdad, Iraq Tuesday, Nov. 9, 2004, as hospital staff x-ray a Marine injured in Fallujah in the background. A U.S. Army Bradley fighting vehicle crashed into her family’s car, according to her parents. The hospital is considered the busiest American combat trauma hospital in the world.(AP Photo/John Moore)