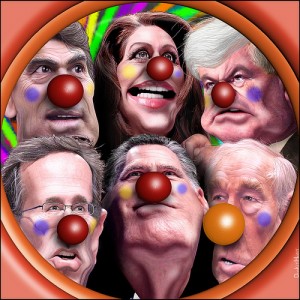 With a few exceptions, The Surly Bartender has held his tongue for the better part of the past year, but like a carbonated bottle of rage into which the world has dropped too many Mentos of crazy, it’s time to explode. Really, when one has to look to the Guatemalan political scene to find honesty, reason and boldness of leadership, you know you’ve entered the silly zone.

We’ll get to that later, but let us start with politics north of the Rio Grande, which have recently centered on lunar colonies and state-mandated vaginal probes. Now, as regular readers know, I’m a fairly Progressive Surly Bartender and inclined to find a Republican / Conservative worldview lacking in clarity, depth or logic — but this time around it really does seem like their candidates for the presidency should be touring the nation in a mini-car, and emerging onto the debate stage wearing squirt-daisies, clown shoes and big rubber noses.

As of this writing, there are still four candidates in the race, and given the eradication of campaign finance laws, there will likely be at least three candidates for the foreseeable future. First in current national polling is Rick Santorum — a latter day Savonarola, seemingly unable to stop obsessing about the m-m-m-moral d-d-d-decay of a sex-sex-sex-ually libertine society. Good lord, I’m glad I don’t live in that man’s head. He’s like a pre-hooker Billy Bibbit, full of repressed lust and desire, tortured by pangs of guilt every time he catches a glance of a woman’s (or, if you think it through, maybe a man’s) body.

Second in the polling is the frontrunner (hrrrmmm?) Mitt Romney — a politician who simply must be an invented character, one I’m imagining has been conjured from an unpublished novella called The Stepford Candidate, written as a lark by George Plimpton and forgotten on a voodoo priestess’ altar during a trip to Haiti in the middle part of the last century. How do you explain his utter inability to behave like a real human being? Easy! He’s only 40 robotic pages long! Double Spaced!

Third is Newt Gingrich, the aforementioned lunar colony enthusiast, whose chronic overuse of adverbs makes me want to frankly, literally, fundamentally kick him in the balls.

Rounding out the field is that old coot, Ron Paul, who, for all his posturing as a different kind of Republican is actually pretty loopy himself, though we’ll largely give him a Surly Pass this time around. We do so with the caveat that, if he’s still around this summer, he’ll receive his very own Surly Analysis.

To understand the depth of the dislocation from reality on that side of the political spectrum, two things must be taken into consideration — and they are intertwined. First, all of the candidates (in fact, most of what remains of that once great political party) are ideologues, and ideologues are the death of legislative governance. That they are ideologues who continue to scream, that “It’s really the Democrats who are crazy socialists” matters little. Even if the major media outlets in the States are unable to detach themselves from the narrative of false equivalence in political debate, facts are facts. Republicans, not Democrats, have purged moderates in lieu of true believers from their ranks. To pretend otherwise is to deny objective reality. Which, of course, is Republican bread and butter.

The second, and related, consideration for understanding Republicans in the early 21st Century is that they have become unmoored from any sense of actual, factual reality.

Newt Gingrich will bring gas prices down to two dollars a gallon by increasing domestic production, denying the existence of an international oil market, AND the reality that domestic production has increased significantly during Obama’s first term. Mitt Romney assures us that Iran will get a nuclear weapon if Obama is reelected, and will assuredly NOT get one if he is president. What? Does he have anti-nuclear superpowers somewhere hidden in that perfect head of hair? Such a statement goes beyond rhetoric and dive-rolls directly into the land of delusion. Why isn’t it mocked publicly? Why isn’t it discarded out of hand, even before noting that his entire foreign policy team is comprised of the same neo-con cretins who deluded themselves into believing a war in Iraq would cost no more than 60 billion dollars, would be paid for by the Iraqis themselves, and that our soldiers would be met as glorious liberators by the rose-tossing citizens of Baghdad?

They all, to a one, wail that America under Obama is being overrun by “illegals,” while ignoring the quantifiable (and reprehensible) reality that the current president has deported twice as many undocumented workers as did President Bush before him.

And then there is the outright denial of science as it pertains to evolution or global climate change. Good god, is this really the best they have to offer?

It appears that the short answer is: YES.

I’ve opined on this before, but it is true: In the past forty years Democrats have made the transition from being a party guided by an overarching vision of the-way-the-world-should-be, to one that is at its root pragmatic. Take, just for example, the observable facts that the most recent big-picture policy initiatives of the Obama administration come directly from conservative think tanks. It was not The Earth Liberation Front who came up with Cap and Trade as a method to limit the emission of greenhouse gasses into the atmosphere; it was a market-based alternative to governmental regulation of pollutants put into the political conversation by C. Boyden Grey, a member of the very conservative Federalist Society when he was working in the Reagan administration. It was not Saul Alinsky who drafted the basis of the current Affordable Care Act (dubbed ObamaCare by its detractors); it was a policy modeled on a Republican idea — one designed by the Romney administration in Massachusetts. Further, the mechanism to guarantee broad coverage in both plans, the much maligned “individual mandate,” was conceived within the walls of the ultra-right Heritage Foundation as a way to keep dirty, hippie, liberal free-loaders from taking advantage of the system. As such, it was championed by Newton Crazyhead Gingrich for 20 years.

As has been often noted, Senator Daniel Patrick Moynihan once observed, “We are each entitled to our own opinions, but no one is entitled to his own facts.” Facts speak for themselves; Republicans of this generation just choose to avert their eyes.

Democrats have, for better or worse, been pragmatic in their design of legislative remedies to complex sociopolitical problems over the past several decades. And what have they received for their efforts? Increasingly more vociferous assertions that they wish to unilaterally disarm the United States and allow godless socialism (with an Arabic accent) to take over our society and jail good, patriotic Republicans in Sharia-socialist gulags wherein they will be force-fed tofu and hummus, while listening to New Age music.

Madness, delusional madness! And yet it surges forth.