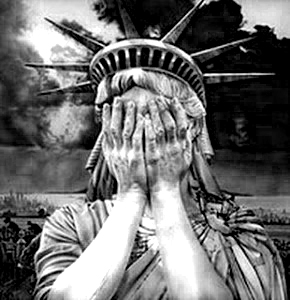 Radical loons on the right have been warning about socialist gulags since well before the time of Franklin D. Roosevelt’s New Deal — and yet nary-a-one militiaman has been disappeared from his compound in all that time. Though y’all cain’t be sure ’bout them FEMA camps . . . Maybe Obama’s jes waiting fer his chance in 2013!

Oh, that such silliness wasn’t actually floating about in the minds of the not-so-loyal opposition. Recently Wayne LaPierre, the Executive Vice President of the National Rifle Association, claimed that Obama’s low-key approach to gun rights during his first term was a “conspiracy to ensure reelection by lulling gun owners to sleep.” He continued: “All that first-term lip service to gun owners” was just a part of a “massive Obama conspiracy to deceive voters and hide his true intentions to destroy the Second Amendment during his second term.” In case anyone at the CPAC meeting might have mistaken his madness for anything but, he concluded: “We see the president’s strategy crystal clear. Get reelected and, with no more elections to worry about, get busy dismantling and destroying out firearms freedom, erase the Second Amendment from the Bill of Rights and excise it from the U.S. Constitution.”

Delusions, built on delusions, resulting in delusions. This must be recognized. It is the factual state of play in American politics.

While Liberals have become more pragmatic, Conservatives have moved in the opposite direction. It is The Surly Contention that my generation (growing up in troubled and increasingly complex times) has had to make a choice. On my side of the dial, we saw that in order to understand the world, we would have to read, think, discuss and reason from a multiplicity of sources — Ricardo to Chomsky, Rousseau to Said, Freud to Foucault,  Brooks to Krugman. Whereas, on the other side, answers were sought not by triangulating towards the truth, but by finding simple answers in a few discrete sources — be they the Bible, Milton Friedman’s Capitalism and Freedom, or Ayn Rand’s Atlas Shrugged.

That dynamic has played itself out over the past several election cycles. Republicans have become ever more secure in the belief that the problems of the world can be solved through a series of simple plans that can be shouted over and over again from AM radio stations, free-market think tanks and the pulpits of mega-churches. First and foremost, never stop cutting taxes. Ever. No matter what. Ever.

That that is a position seriously held as a fundamental conviction by an entire political party is just madness. Dangerous, delusional madness.

And if you want to address the challenges of an increasingly diverse, multi-cultural, multi-ethnic, multi-religious, gender- and sexual-identity diverse, economically unbalanced society — do it by gutting programs that might help the disadvantaged and throw up roadblocks to all legal structures intended to secure the rights of anyone different from you. Just like Jesus told you to do. Because, of course, Jesus was all about conservative American values, Social Darwinism and exclusively post-marital, procreative, heterosexual whoopee!

Just please don’t mention those troubling passages about the camel, the rich guy and the eye of the needle or any of that hippie-stuff found in the Beatitudes. Blessed are the merciful? Not on death row, buddy! Blessed are the peacemakers? Are you joking? Peacemakers are naive pussies who want America to die!

What must it be like to live in a modern Republican brain? One shudders.

Meanwhile, the President and the Democrats keep trying to govern — attempting to prevent the  infrastructure of the nation from collapsing and the planet from descending too rapidly into a fever dream of global climate change. While they’re at it, Obama is trying to end a few wars and avoid stumbling into the next one. All with the active obstruction of delusional ideologues. It’s enough to fry the Surly Brain, I tell ya.

If you need any further evidence of colossal Republican self-delusion, just consider what they have done with the climate change debate. When faced with a scientific conclusion that global warming is occurring and is significantly impacted by the actions of human beings — a consensus derived through forty years of work by independent climatologists from around the planet — what is the uniform Republican response in 2012?

They all simply deny it exists.

They choose to delude themselves and the nation, Rick Santorum going so far as to call global climate change “the greatest hoax ever perpetrated on the American people.”

What are we to do with such bald, delusional idiocy? Short answer is, I suppose, we look forward to another four years of an Obama administration attempting to lead a political system that has broken down because one of the parties has checked-out of The Reality Hotel and left no forwarding address.

In the coming months the President’s reelection campaign will largely consist of continuing to let these lunatics play out enough rope to hang themselves — while reminding America that General Motors is alive and Osama bin Laden is dead. One has to admit, it’s a simple but sound political strategy.

Still, I do wish that President Obama would use the Bully Pulpit to bring some reason to one of our hemisphere’s great scourges: the utterly failed War On Drugs. Which brings us back to Guatemala.

Recently, Otto Perez Molina, the President of Guatemala, has been sounding a call for the legalization of drugs in Central America. His point is clear, even if his motives are opaque. The nations of Central America have all suffered inordinately from the violence associated with the transshipment of cocaine, marijuana, heroin and amphetamines to the United States. Each country in this region has had to contend with increasingly powerful narcotraficantes usurping control of vast regions within their borders and crippling their governments with the corrupting influence of narco-dollars and the violence they can so easily procure.

Just consider the impact at the street level: Each year there are approximately 6,000 murders in Guatemala, most of them related to drug and gang violence. And that is out of a population of 14 million. Adjusting that rate for the population of the United States would mean 130,000 murders in American streets each and every year. Would New Yorkers or Houstonians be so sanguine about the need for the continuation of this bloody, stupid war if we’d filled 3.9 million body-bags since the first shots of the War On Drugs were fired back in the 80s? Run the numbers yourself and think.

To deny that this is a very real war taking place in the middle of very real population centers with very real human beings dying and living under the threat of constant violence is definitionally delusional.

In the United States the victims of that war die less frequently, but the prison population has exploded since the 1980s, largely fueled by that self-same War On Drugs. The numbers of Americans held in prison in 2011 topped 2.4 million, making it, by far, the most incarcerated nation in the history of the world. While Americans only represent about five percent of the world’s population, fully one-quarter of the entire planet’s inmates are incarcerated in “the land of the free.”

Yet, even the supposedly lily-livered, socialist, soft-on-crime Obama administration is still too timorous to acknowledge this REALITY. That such violence and expense is crippling societies throughout the Americas is undeniable, and to continue along the irrational path we’ve forged for a generation is foolhardy beyond belief. On this subject, The Surly Bartender puts President Obama on notice — Dude, there’s room for you in the clown car, yet.

Now, no one knows exactly what is motivating President Perez to push this eminently rational agenda. Maybe he’s serious about legalization. Maybe it’s all a feint to garner greater military aid from Washington. Time will tell, but at least for now he is taking a brave and controversial stand. A stand that falls well outside the orthodoxies and ideologies of conservative politicians who normally see the solutions to criminality at the end of a gun.

In this regard, The Surly Bartender stands openly impressed by the pragmatic flexibility of President Perez. So, kudos, Otto. Keep it up.

The political cartoon at the head of this column was created by Donkey Hotey. We encourage you to visit his very cool site here.