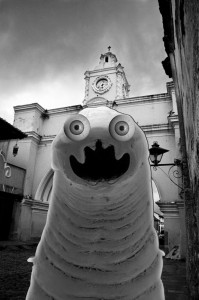 Dried Papaya seeds, Secnidal, Flagyl, perricone tea, cloves of raw garlic, part-time veganism, chlorinated vegetables, wearing green underwear when the moon is full, braiding the pubic hair of a mountain goat whilst performing an Irish folk ballad: I’ve tried almost everything to shift the bastards, from the hardest drugs the man in the pharmacy (who bears a startling resemblance to Mr Myagi) can provide me, to the most unlikely-sounding whimsical shite Google can muster. Yet, still they thrive.

I have become au fait with such terms as “host” and “incubation period.” I seem to spend a substantial percentage of my time boiling herbs. I discuss my bowel movements with people I’ve met only moments before. I have become one of the stricken, one of the damned, one of the people you see despondently propping up the end of the bar with a fizzy water and a sachet of re-hydration salts, glaring enviously at “The Healthys.”

Amoebas: they aren’t funny, they aren’t clever and they certainly aren’t sexy, but they have become a large part of my life for the past three months and it’s time to write about it. Before I share my experience with you, however, I will say this: please forgive me for any vulgarity. These observations  are written in the spirit of honesty and openness, and in the hope that by expressing the intense frustration which comes from seeking a curative silver bullet (which continues to elude) I have a better chance of preventing myself from completely losing my marbles. I tell this tale in full understanding that upon publication it is likely I will lose any residual street-cred which still lingers from the days before I become one who perpetually wailed about abdominal cramping. I hereby knowingly relinquish any future hope of any romantic or intimate relationships within the radius of this magazine’s catchment zone.

I’ll begin by saying that I’ve almost forgotten what life was like pre-parasites. These days I seem to exist in some kind of godforsaken, low budget, Alien sequel. They have resiliently resisted all extermination attempts — coaxing me into a false sense of security as they lay low for a period of weeks — only to sally forth with renewed gusto after a false reprieve. I am in fact currently knocking on the door of my four-month anniversary in my role as the mother ship; evidently I’m somewhat of a catch in the world of single-celled organisms. Week upon week my innards provide this potent breed of flesh-eating buggers with a rollicking good time as they merrily chow down on my intestinal tract with apparently no regard for traditional (and not so traditional) medicine. Who knows, maybe Sigourney Weaver had it right all along and the only solution is to shave my head and throw myself into a ravine of boiling lava; Pacaya is only 45 minutes and $10 dollars away, after all.

In all honestly, I am a little worried that they might be devouring me towards an early grave. If you look them up on the net (which I did, and categorically do not advise if you are similarly afflicted) you will discover a disturbing number of gruesome images, page after page of terrifying statistics, and detailed stories about the slow and painful deaths suffered by fellow members of the human species when the amoebas moved from their intestinal tracts to their brains. Yes! Left untreated, your amoebic dysentery can morph, over time, into BRAIN WORMS.  Here’s a brief quote from one of the more sardonic sites:   “. . . parasites infect us all the time. They live in our bodies, even in our cells, and most of the time we do not even know that they are there. The brain can provide a pleasant, nurturing environment for parasites, because it has structures that prevent many of the immune system’s cells from entering, at least in the early stages of infection. Add to that plenty of oxygen and nutrients, and the brain seems like a rather nice place to live.”

Living with amoebas not only tests your patience and your immune system, but it examines the limits of friendships. Where do those relationship boundaries lie? How far would you go for a mate? I am pleased to say that my friends fared pretty well on this count. An example: one day, unable to get back from the city in time to make it to the laboratory with my “sample,” I gave it to a gal pal of mine to deliver on my behalf.

(I pause at this point with a side note: the editor suggested that I remove the following paragraph in the interests of propriety. I decided to leave it in, partly because now that I have decided to make my infectious little beings available for public scrutiny, I might as well tell the whole story. Nevertheless, he is a wiser man than I and I ignore him at my peril. So, as a compromise, I issue the following warning: more sensitive readers may wish to skip ahead a paragraph.)

Hannah Wallace Bowman first knocked our socks off several years ago when she lived in Antigua and wrote a couple of genius pieces for La Cuadra. Then, pursuing journalistic and storytelling opportunities in Europe, the Middle East and Africa, she headed out into the wider world. Now she's come home and we're on pins to start collaborating with her again in the coming months and years. Welcome home, beautiful and brainy, we've missed you terribly.
Read more by Hannah Wallace Bowman

Being Strong With Yourself
By Kevin Petrie
Saturday, August 10th, 2013

Terrible But True - The Naturists