It was Christmas Eve in New York City,
and Penn Station looked like a goddamn refugee camp. Outside, a freezing rain pelted busy streets awash in festive bunting and deadly ice patches. Inside, thousands of cold wet travelers jostled and shoved, swearing harder with each announcement of further train delays. I’d found a place to wait tight against a wall, sweating in the crowded heat. At my side were two soaked and tearing shopping bags literally bursting with gifts, their now-wet wrappings torn more with each passerby’s inadvertent trample. There may have been tidings of comfort and joy abounding somewhere, but it sure wasn’t here. And as one final red-faced commuter gave my bags a passing – and possibly deliberate – kick, the last of my ‘good will toward men’ quietly trickled away.

Growing up Jewish, I had no real context for Christmas other than it appeared to be a whole lot more fun than Chanukah. The neighbors’ houses were lit up with colored lights and lawn displays, a twinkling tree centered proudly in each living room window. Television was filled with animated specials my parents would not allow me to watch. My non-Jewish friends were nearly apoplectic with anticipation. Meanwhile, I was kept out of all Christmas-themed pageants at school and had to sit in a back room with the two creepy Jehovah Witness kids as if we were being punished. In a way, I guess, we were.

It seemed to me that Chanukah followed the familiar ‘cruel oppression/miraculous triumph’ theme of virtually all Jewish holidays. Mostly, it felt like a lame consolation prize. Eight nights were no match for One Awesome 24 Hours. And while I had no interest or affinity at all for the ‘Christ is born’ part of December 25th, it’s tough to tell a kid he’s forbidden to get excited about bright lights, happy songs and garish amounts of gift-giving on a Super-Special Snowy Day that promises Joy For All. I was never bitter when it came to Christmas, but knew I was stuck a total outsider.

My five-year-old nephew, on the other hand, was in way deep. And while I didn’t get along with his parents for any number of valid reasons, I loved the kid and genuinely enjoyed his annual frenzy of Christmas expectation. But judging from our conversations at Thanksgiving a few weeks earlier, I understood that this year would be different. He had arrived at that life-changing Santa Clause tipping point that all kids must face: Knowing he could still believe if he wanted to, but realizing that he’d have to face the truth soon enough. As the twinkle-lit houses of New Jersey whipped past the windows of the overcrowded Raritan Valley Local, I hoped my suspicions that Christmas is just another of life’s brightly wrapped disappointments would never have to become his.

I reached my brother’s home and heaved my torn bags of tattered gifts towards the general direction of the family’s large artificial tree. My nephew looked at the presents then at me, his face scrunched up in a combination of teary anger and fearful concern. “Why,” he asked, “are you so late?” I softened immediately, going down to one knee and opening my arms. He ran in for the hug. “I thought something happened or you weren’t coming,” he snuffled into my shoulder.

“Well, Jeff,” I said. “Something did happen and I almost didn’t make it.” I sat on the couch, craned my head to make sure his parents were busy in the kitchen and patted the cushion next to me. He climbed up into my lap.

“The train had just left Newark,” I began, “and we were going really fast. Everyone was smiling and singing and happy to be headed home for Christmas Eve. Suddenly the train put on its brakes. There was a long shriek of metal, then these loud, awful thuds. It felt like we hit something – or some things – really big. People and packages were being thrown everywhere. The train finally stopped, and everything went quiet. The conductor opened the door, and I followed him outside to see if I could help. I couldn’t believe what I saw. It was a terrible scene.” 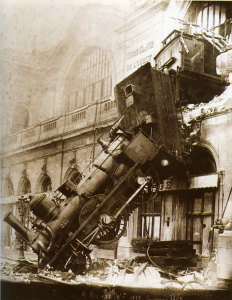 The boy’s eyes got wide. “What did you see?” he asked.

“I’ve never seen anything like it,” I continued, “and never want to see anything like it again. We’d hit a whole bunch of deer. Seven or eight at least. There were steaming piles of deer guts all over the tracks. Broken antlers stuck into the front of the train. And in the middle of it all was this old fat guy with a white beard. He was screaming and moaning in pain.”

His little jaw dropped in horror. “Was it Santa?”

“Hard to tell,” I said. “He could have been wearing a red suit, or it just might’ve been all that blood. Didn’t you hear all those police and ambulance sirens about an hour ago?”

He nodded his head rapidly.

“But here’s the incredible part: Over in the woods by the side of the tracks, I saw these big bags of gifts. When I looked inside, there was a whole bunch with your name on them. They were pretty banged up. But while the paramedics were working on the fat guy, I grabbed as many of your presents as I could, called a cab, and brought them all here for you. It’s a Christmas miracle!”

A huge smile slowly spread across his face. He suddenly laughed as if being tickled and gave me a hard punch in the chest. “You’re such a jerk!” he howled delightedly, then ran off to share the tale of yuletide carnage with his parents. They were not pleased. I did not care. I’d always been an outsider there, too. Yet if it weren’t for the unique bond between the boy and I, I know I would have been made officially unwelcome years earlier. And if it weren’t for the outsider’s influence I knew he needed, I never would have made the trip.

As he became older, the story would become an annual Christmas custom between the two of us. Together we’d concoct grand embellishments, like the sight of Rudolph’s glowing red nose dimming in blood-soaked snow or Santa’s myriad of compound fractures. It was our own annual reciting of ‘The Night Before Christmas’ by way of ‘Faces Of Death’. And while the years would bring additional traditions to our holiday – like randomly screaming “YOU RUINED CHRISTMAS!” at each other, giving elaborately boxed gifts of cheap white tube socks, or Uncle Miles’ announcement that he would be heading down to the local church’s outdoor nativity scene at midnight to have sex with the live sheep – the story of Santa vs. New Jersey Transit would remain our own Cruel Yule touchstone, a singular shared connection to the holiday and each other. More than 15 years later, it still is.

When you get right down to it, most religious holidays amount to elaborate pathological explanations of monumentally manufactured events. But remove all the cargo-cult trappings and moral spankings, and what’s left might just be a simple series of inventory days for what makes us human. Call it what you want and ascribe any denominational tall tale you need, but closing out the year by choosing to summon whatever joy you can and sharing it with whomever you want seems to be a pretty good deal. Ultimately it remains the responsibility of each of us to find our own way inside. It’s what I think about every Christmas when I see the smiling face of a child. Or a railroad crossing.

Miles Afuera lives and works in New York City. He belongs there.

Do you have a favorite Christmas story? Share a teaser below and we’ll drop you a line if we think it’s publishable. Pro-tip: Dark and funny helps.

Grace and Empathy from a Beautiful Stranger
By Michael Tallon
Thursday, December 24th, 2015