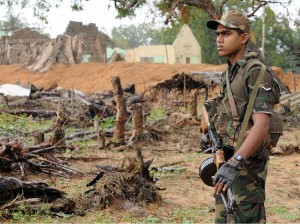 After dinner, Uncle Money and I retired to the beach to smoke a spliff I had rolled using a receipt, thinned and softened by an extended tour in the bowels of my wallet. It didn’t taste great, but it worked. I advocated an immediate departure from Trinco, citing the fact that “It’s a fucking civil war.”

Uncle Money countered by suggesting that I “stop being such a goddamn pussy all the time and pass the spliff.” It was somehow determined that his argument was more valid, and we retreated from the gathering darkness to lie in our beds and listen to the “pop pop pop” of distant machine gun fire and the muffled “thud” of far-off mortars.

The next morning, operating under Uncle Money’s chill-the-fuck-out-dude-if-they-were-going-to-shoot-us-they-would’ve-done-it-already principle, we smoked another spliff (this one rolled with toilet paper) and walked back into town to resume our search for proper rolling papers. After several fruitless minutes of banging on doors, a young soldier approached, dwarfed by his enormous gun, and offered to assist us. He didn’t speak much English, and I spoke only a similarly pitiful amount of Sinhala, but through a mix of both languages (and a good deal of mime) I managed to completely fail in explaining what we were looking for.

Uncle Money, who had been standing off to the side giggling, suddenly interjected. He held his pinched fingers up to his lips and made a sucking sound, smiled at the soldier and said simply “Bob Marley.”

The soldier grinned and yelled something at a shop door, which opened, and in less than a minute we had a brand new pack of skins. We thanked him, and as we were about to leave I reached over and turned his hat around backwards. “American Marines wear it like this,” I said.

He stared at me blankly for a moment, then pointed up at the hat. “American Marines?” he asked. I smiled and nodded. He stared at me for a few seconds more, then spun around on one heel, his AK-47 twirling out beside him, and began walking swiftly towards a group of soldiers who had been watching our interaction. “American Marines!” He shouted, pointing towards his hat. We laughed and made our way back towards the beach and our hotel.

I don’t remember much about the rest of that day. We walked up and down the beach, staring out at the small navy ships bobbing up and down off shore. We chatted with the owner of our hotel. We smoked more pot than may have been necessary. Now and then we heard gunfire or explosions echoing down the beach and out across the water, but never close enough to be more than a passing concern. The clusters of soldiers never interrupted their conversations or put out their cigarettes, so we assumed there was no cause for alarm.

I remember the lines of brightly-colored fiberglass fishing boats scattered across the beach, donations from a Dutch organization meant to replace the smaller traditional boats lost to the sea’s angry rise. Unfortunately, few engines had been provided, and the boats were too large to paddle with the plank oars traditionally used in Sri Lanka. Thus, not much fishing was being done. Although, many of the boats appeared to be lived in. For the record, a non-functioning boat is a very poor substitute for a lost house.

We got up early the next morning and watched the sunrise over the Bay of Bengal before walking out to the bus stop. The election was over and so was the curfew.

People rise early in a fishing culture, and as we began down the beach under a lightening sky, a buzz of activity swirled all around us. Old men sat in groups, smoking cigarettes and mending nets. Children ran laughing up and down the beach chased by wriggling, barking dogs, both with ribs protruding through thin skins. Despite the poverty, the destruction, the hunger, the homeless men and women squatting ankle deep in the ocean to relieve their bowels, it was truly a beautiful place.

Long-trunked palms rustled their dreadlocks against the early breezes and laughter emanated from around softly smoking cook-fires springing up here and there along the beach.

Terrible But True - One Night in Bangkok