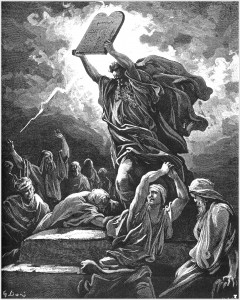 There was a lot of ugly noise in the newspaper this morning, and it kept me awake even though the bus was hot and crowded. There was the usual amount of homicides, assaults, and traffic wrecks – but also threatening statistics on infant mortality and malnutrition. It was only bad and going to get worse. Gangs were ravaging Cuidad Vieja, bus drivers were catching bullets in the head, and the hungry and desperate were slaughtering iguanas to put breakfast on the table.

I was nearing the end of a six hour ride, just getting to the uplifting articles about futbòl victories and the invention of transparent concrete, when a weathered old man in a Jesus t-shirt got on the bus.

In some of the more secular countries people like this might be dragged off like madmen, but in Guatemala they are tolerated and sometimes even rewarded for their efforts. He was like the other street peddlers who jam themselves into the aisles to sell toffee candies, magic pills, and aromatic candles, but significantly louder. Bible in hand, the old man politely called for the attention of the passengers. He had some wisdom to share, he said, and wanted to “talk a little about God’s message”.

It all started calmly enough, but something must have unnerved him. In a matter of minutes he was in a fit of rage, screaming with the thunderous energy of a true evangelical. “God sees how you live, and you insult him!” he was shouting. “Robbing, lying, stealing, cheating, divorcing, abandoning your children and living like arrogant fools.” He shook with fury as he counted the numerous sins on his fingers.

“If you don’t change your ways Armageddon will be upon us,” he yelled. “And when this judgment comes it will be nothing like Mitch. You will be clinging to the top of coconut trees as the water rises, and this time it won’t go down. The rains will continue and we’ll all be washed away like rats.”

At times he turned the full force of his sermon to one person on the bus and they would either stare back with a blank expression or turn to the window.  The old man had that rabid look of a crusader in his eyes, madly gesticulating like Godfrey of Bouillon at the gates of Jerusalem.

I stared out the window and tried to avoid eye contact, knowing that these people generally shout themselves out. Like a tropic storm that suddenly falls quiet, they will smile, remind people of God’s love, and thank the driver for the opportunity to speak.

We were closing in on Zona I and the old man was growing tired. He handed out business cards that read, “Man does not make the rules, God makes the rules”, and said we could call him any time, day or night. A few passengers gave him coins to buy a coffee and continue the mission, but most seemed indifferent.

To me, raised in America where people value their space, preaching on the bus seems like a flagrant violation. In the United States if you step on someone’s lawn, the owner is within rights to walk out with a shotgun.  And if you play the stereo too loud at night the police show up with a noise complaint and nasty fine. Freedom of expression is upheld only to a point, and it’s something I’ve grown comfortable with.

Perhaps it’s these cultural differences that causes me irritation when old men get on the bus and begin to yell, or maybe it’s the fact that I’ve lead a pampered life in single passenger vehicles with mostly people I know.  Whatever the reason, I have to respect the local culture and wish the old man well. I hope he raises a lot of money and builds himself a church in some pueblo, or buys a megaphone so he can spread god’s word in Parque Central — just as long as he’s not on the bus tomorrow.

Even on a short chicken bus ride I am painfully aware of my own mortality, and if at all possible, I’d rather not be reminded of my spot in hell.

Terrible But True - One Night in Bangkok