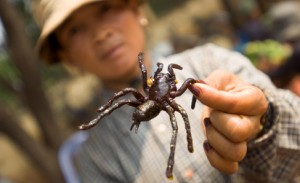 The plump, little man handed me a palm-sized, pan-fried tarantula, insisting it would “make strong with girlfriend.” I had no girlfriend with whom to make strong, but I was 21 years old and traveling through Cambodia, so I wasn’t about to turn down free, fried spider.

Most of it wasn’t bad. The legs and thorax were crispy and tasted like fried anything. Just oil and crunch. The big fat abdomen, on the other hand, that was disgusting. It was full of mushy goo and tasted like a mash of rancid fish, old cat food, and stale body odor.

I haven’t actually tasted any of those things, but I’ve smelled them, and I’m pretty comfortable with the accuracy of that description. But, beyond the culinary experience, the boner spider did work as advertised. And quickly.

I’ve heard Cambodia has quickly become a regular stop on the Southeast Asia backpacker’s trail. And with its neon lights, televisions and easily accessible fast food (of the non-boner spider variety), that makes sense. But, back in the spring of 2003, the country didn’t have much tourist infrastructure. To enter the country, I crossed the border on foot from Vietnam and caught a shitty bus toward the capital, Phnom Penh.

And the bus was shitty. Holes rusted through the floor allowed passengers to watch the ruddy, red clay of the unpaved highway stream by below, and eclectic seating lent the vehicle a whimsical (or possibly maniacal) air. There were wooden benches bolted to the floor, upholstered school-bus seats with stuffing and springs sticking out from every corner welded to the frame of the bus, and molded plastic chairs attached to nothing at all. With every bump and turn they went tap dancing across the cabin, precariously near the rust holes in the floor. The bus ran horribly and was obviously unsafe, which I enjoyed very much.

I mean, that’s the whole point of traveling right? To eat fucked up things while utilizing potentially deadly transport? Hell, that’s why I travel.

Other than myself and the dude who sold me the tarantula, the mobile death trap was sparsely populated. Half a dozen Cambodian dudes hung out in the back, and a trio of Scandinavian girls bounced around in the front seats, all tanned with short skirts and tank tops and lots of giggling. I lingered in the bus’s midsection, watching them and, all the while, being disconcertingly hard. Perhaps it was the effects of the spider, or maybe it was just the fact that I was 21 and hadn’t gotten laid in months, but I wanted to make strong with them badly. Very badly.

The oppressive Cambodian heat and the bus exhaust pouring in from the holes in the floor were making me feel woozy. Add to that the raging erection I could not control, and you will understand that I soon began to feel quite uncomfortable. Then the bus broke down. Fuck you, bus.

Out of my window, I looked around and saw nothing. No tea stalls or restaurants, just rice paddies and the occasional waving palm somewhere off in the distance of a pool-table horizon. We were told it would be a few hours before another vehicle could arrive to collect us, and the local guys left the back of the bus to stand around and smoke. One of the Scandinavian girls had a portable radio, and she cranked up some Britney Spears. All three of them then began dancing in the aisle, gyrating and bouncing and twitching tanned thighs beneath gently rocking hips, taunting me.