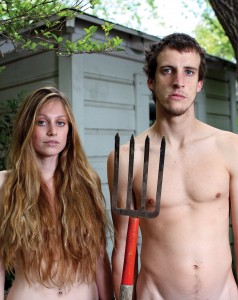 David and I loitered anxiously, hoping someone would pick us for their team. The crowd were about to play “It’s A Knockout” and we wanted in. Straining to catch the captains’ eyes, we waited pitifully as the finger of favour pointed at people all around us. But we just weren’t wanted.

We’d come to the Eureka Naturist Club as part of my mission to try new things in lieu of a holiday. I’m too skint to get away from the city for very long, and I’m hoping to ward off cabin fever by dabbling in lifestyles I’ve never experienced before, such as getting a colonic irrigation as I wrote about in the last issue of La Cuadra, or testing the cultish waters of Scientology for a few weeks, or, as was the case that weekend in Eureka, exploring the world of naturism, which is why I was standing naked in a field just outside of London, trying to blend in.

I thought I’d known what to expect. I’d read The Complete Guide to Naturism cover to cover. I’d drilled myself on Naturist Etiquette: always sit on a little towel; no lewd behaviour; no gawking; no erections. I’d developed a genuine respect for this wholesome and asexual lifestyle and for the kind-natured folk who followed it, and was determined not stand out as a questioning newbie.

(On reflection, I probably should have asked some questions first.)

David and I had booked in for an overnight stay at the club, intentionally timing our visit with their “It’s A Knockout” weekend as a distracting way to introduce ourselves to naturism. It all seemed so innocent.

But getting in the buff in our cabin, I started to have a wobble. David handled the idea much better than I. Rugby players like him are always naked, but I had never done public nudity. For years I had been trained that being near someone who is naked meant only three things: a shag is about to happen, a shag is happening, or a shag has just happened. I have never had a communal naked shower or sunbathed topless. These may perhaps have been easier starting points than the Eureka Naturist “It’s A Knockout” weekend; still, here we were.

As we stood with only flip-flops to give us dignity, surveying the contestants frolicking in bikinis, trunks or full-on shorts and t-shirt, I profoundly regretted leaving my sarong at home. A sarong, my Complete Guide had assured me, would be unnecessary and would make other guests feel uncomfortable. On the plus side, at least no-one seemed uncomfortable by the sight of David and me putting out all we had to offer.

On the contrary. They were all smiles.

Yet even if the contestants were preserving their modesty, this was a naturist retreat, and a stern reminder that if I was to learn about naturism, then I needed to engage. We hung around awkwardly for a few minutes, watching the others play the game for as long as our pride could withstand. Then David suggested that the pool would be a safer bet. And he was right. There would certainly be other naked people there.

And there were, and several of them were wearing other naked people.

It took us a while to notice. It wasn’t a big pool so we don’t have an excuse, really. It’s just that we were so convinced that we wouldn’t see anything sexual that we were blinkered with innocence. This was a naturism club – nudity, yes; sex, no! At first I noticed one couple kissing, which surprised me. And given that the kiss surprised me, I certainly wasn’t ready for the mental leap required to recognise them as being in mid-bonk.

“David,” I hissed as I caught him up at the deep end. “That’s a bit much isn’t it?” I darted my eyes to the canoodlers.