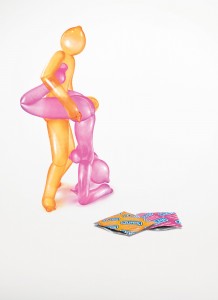 The North Dakota State University’s Wellness Center gives away free condoms. Since freshman orientation, I had heard this, but never dared to take one.  Up until my junior year I did what every sexually repressed, former Catholic-high-schooler would do.  I touched myself when my roommate left the room, and when I needed condoms I’d choose the anonymity of the Wal-Mart self-checkout lane.

For the first three years of college this issue was rarely broached.  I was getting laid about as often as I was getting A’s on math tests.  To put it mildly, one wouldn’t have needed an abacus to keep track of either event.

Then, during my junior year an amazing thing happened.  I started getting laid almost as often as I skipped class – all the time!  With all this newfound tail came new financial responsibilities, not to mention the increased frequency of my trips to the Wal-Mart self-checkout lane.  On an average week I was spending $6.99 for a Trojan twelve-pack.  That means that I was doling out 28 bucks a month on condoms.  If I were to sustain that level of sexual activity for ten years – then I was facing a sizable opportunity cost; assuming a wise but manageable investment strategy of 7.5% compounded monthly, I would be losing $5,087 over the coming decade.

I’m not so good at math, but I was fucking an economics major for a while.

I decided that it was time for me to cut the cost of my sexual activity and use the Wellness Center condoms.

The thought came to me while lifting weights at the Wellness Center gym.  I lifted those 40-pound weights, and in a testosterone infused moment, I decided, “NO MORE! No more paying for condoms! Somewhere in this building there are free condoms, and I am going to get them. This is America – the land of morally slack college girls and free condoms.  And God Bless America!”

I strode down the stairs from the weight area towards the front desk, certain that free condoms were near.  As I approached, I saw a basket filled with small, flat, colorful items. Oh, hello condoms! It made such sense: a basket of condoms right up front to provide easy access for all hopeful undergraduates looking to score safety-first style.

As I neared the basket, my Catholic upbringing surfaced, making me feel the full weight of the shame I was taught to associate with condoms. Truth be told, at this point in my life,  and despite the twelve-pack a week burn rate, I was still timid around condoms in the sober daylight. Surely, the inner circle of hell is filled with college students taking free condoms from their campus wellness center… Such is the Roman Catholic mind.

My pace slowed and I approached the basket coyly.  As I passed it, I casually extended my hand while keeping my eyes straight ahead. I wanted this to seem like, oops, my hand accidentally fell into this basket of condoms, and because it is sticky from all the honey I ate, these condoms, against my will, are sticking to me. Oh well, guess I’ll put them in my gym bag.

I was trying to make myself as inconspicuous as possible when an angry woman behind the desk took a belligerent step in my direction and demanded, “Why are you taking those!”

My awkwardness soared to new heights. I judged that this woman was joking – toying with my puritanical ethos. I kept reaching and tried to play it cool.

She bellowed again, “Why are you taking those!”

“To have sex with.” I fired back at her trying to seem comfortable with my decision to have premarital sex.

Just as my fingers touched what was in the basket the incredulous lady screeched, “WITH THE YOGURT TOPS?”

Then I saw what was in the basket: Yup… Yoplait yogurt tops. Apparently Yoplait was raising money for breast cancer treatment across the country by asking customers to save their lids and send them in.

Not only had I mistaken these lids for condoms, I had also told the lady behind the front desk that I was going to have intercourse with them. Beyond the point of recovery, I mumbled, “Oh, I thought they were condoms.” This gave the impression that I thought condoms were little aluminum foil lids. Lids I claimed to want to fornicate with.

As I powerwalked to the exit, the woman angrily informed me that they were certainly not condoms. I left the Wellness Center that day with three certainties: 1) God hated me. 2) From now on I was going to do my bicep curls elsewhere. 3) There is nothing shameful about continuing to buy condoms at the Wal-Mart self-checkout, 28 bucks a month be damned.

Later in life, when three of my acquaintances would have “oops babies” as a result of using their college’s free condoms, I decided that maybe God doesn’t hate me. Maybe he just doesn’t want me to go forth and multiply any time soon.